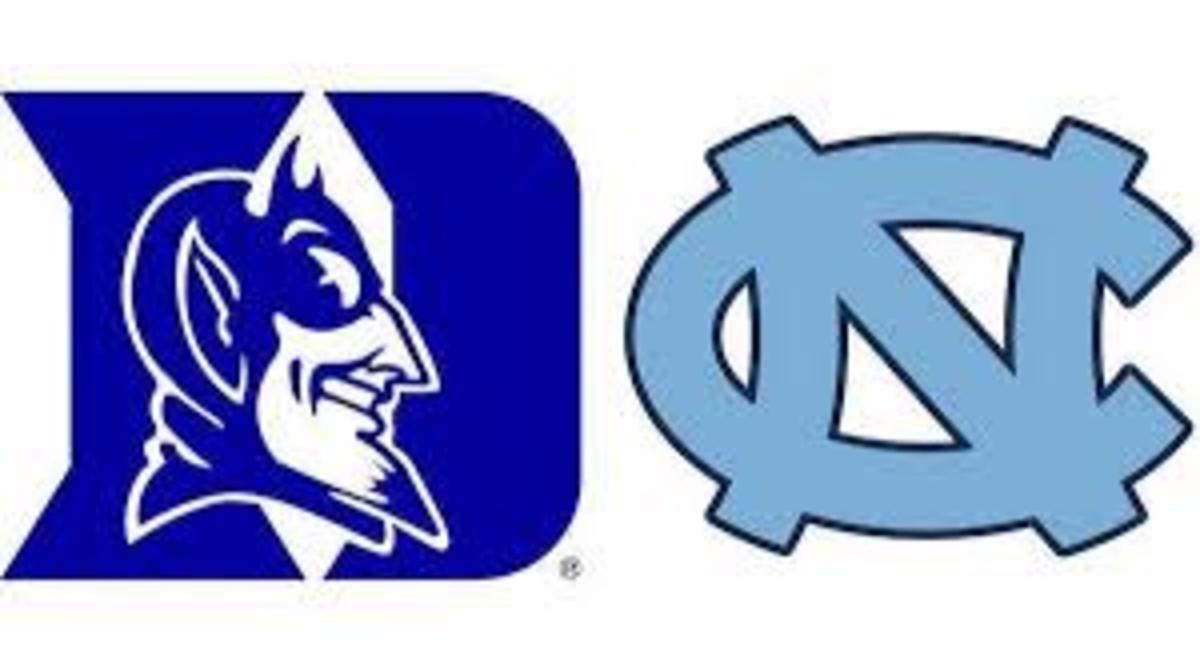 It was inevitable, I guess, the same way good dogs age, Polaroids fade and rock drummers spontaneously ignite. For decades, it seemed that the ultimate clash of civilizations might never happen. The basketball gods seemed to deign that the world just wasn’t ready; that the earth’s crust could crack, releasing some kind of noxious gas or that the atmosphere would be blown into space. The world just wasn’t ready, and probably never would be, for a Final Four game between Duke University and the University of North Carolina at Chapel Hill.

But sometime before last weekend, the gods changed their minds, or at least the NCAA selection committee and the good folks at CBS’ publicity department. For years, the committee was careful never to place Duke and Carolina where they could face off before the final game. This year, with the twelve month parade of Coach K’s farewell tour coming to an end, I’m guessing someone did the math and determined that manipulating the brackets so the two schools could go head-to-head in semi-final was a maneuver that was worth it. This would increase the odds of the apocalypse from extraordinarily low to simply low. And as they say, a butterfly flaps its wings in Indianapolis and soon Roy Williams is spitting into the Mississippi River.

Of course, Roy Williams is no longer the North Carolina coach. Neither Matt Doherty, nor Bill Guthridge, nor the legendary Dean Smith. It’s freshman coach Hubert Davis, a former UNC player and assistant coach (and, I’m telling you, my classmate at Carolina). Duke’s coach, as it has been since March 18, 1980, is Mike Krzyzewski, now the winningest men’s basketball coach of all time, as much as it pains me to say. For perspective, Dean would coach almost exactly half of his 36-year career at UNC against Krzyzewski, who has now coached Duke for another 25 years since Smith retired in 1997.

I guess in the 41 years in which Duke vs. Carolina has become one of the biggest, if not the biggest rivalry in sports, one might have expected that to happen. And now, on the eve of K’s retirement, which will be either tomorrow night, inchallah, or Monday night at the latest, it has happened.

By midnight tomorrow night, as many have written, one side will have eternal bragging rights, and the other will be forced to roam the earth as the ghost of Jacob Marley.

It’s a bet few of us here on Tobacco Road would make; it’s a bit like Russian roulette. The risk/reward ratio is highly asymmetric and has a strong negative bias. For those of us who grew up or went to school between the River Haw in the west and the River Neuse in the east, it’s the basketball equivalent of the Ghostbusters crossing the beams, or putting Mentos in Coca-Cola, or making a joke about alopecia in front of Will Smith.

But as renowned social psychologist and North Carolina product Ric Flair said, “whether you like it or not, learn to love it.” We must appeal to the wisdom of the ages to overcome it.

This rivalry covers more ground than the taproot of a Carolina pine and is woven into the fabric of my own family’s history like perhaps no other strand. My mom went to Duke and was an avid basketball fan and my dad went to UNC and played football there. So we were incredibly lucky to have basketball season tickets to Cameron Indoor Stadium and Carmichael Auditorium, and later to the Dean Dome. I was there with my mom and dad, sitting in Section 16 in Cameron, when Coach K first won against the Tar Heels. He has since won 49 more against Carolina.

As a graduate and Carolina fan, I guess I should feel pretty good that despite Duke’s (and Coach K’s) wild success, the Blue Devils have only averaged 1.2 wins per game. year against the Heels over the next four decades, but then again each felt like someone had kicked my dog, some more than others. There was the Austin Rivers shot, the Duhon layup, half a dozen doses of JJ Reddick, and then of course, Laettner. Duke finally rose to the pinnacle of the sport when they eliminated UNLV in the National Semi-Finals in Indianapolis in 1991, the last time Duke and Carolina were both in the Final Four. Duke then defeated Roy Williams’ Kansas team to win their first national championship. I even shot for Duke – I was there in Indianapolis sitting next to my mom, of course, but that was the last time. As soon as Duke won, the “Go To Hell Carolina” cheers rose and I gave up my dual nationality on the spot. After all, I was a student at UNC at the time.

Luckily for me, the gods would soon be looking favorably on Chapel Hill again. Duke would win it again in 1992, but Carolina would win it again for Dean Smith in 1993, in New Orleans, where Michael had given Dean his first championship in 1982, and would go to the Final Four five times in the 1990s. I mean, the Stackhouse/Wallace/Jamison/Carter era was an embarrassment of riches.

Since Jordan’s famous shot in 1982, Carolina has won national championships, as has Duke. Twice, the two programs have won the title in succession, which illustrates what made this rivalry so great – it is obvious that both programs have improved. When K arrived, Dean Smith was running the ACC. It was up to Coach K and the much-missed Jim Valvano to challenge him. Then the crown went to K. Even though Carolina was neck and neck with Duke, the game was changing in Duke’s favor.

Dean Smith lobbied for Krzyzewski to take the helm at USA Basketball, and K did a masterful job with the Olympic team. Unfortunately for the Tar Heels, that, and an academic scandal in Chapel Hill, led to a slight but definite recruiting advantage that makes Duke perhaps the best collegiate launchpad for future NBA superstars. Ironically, Carolina’s inability to attract “diaper dandies” helped Roy Williams build veteran teams capable of deep tournament play for years, but K’s talent advantage was persistent.

Unfortunately for Duke and for college basketball in general, Duke teams, among others, became something of a revolving door for NBA talent, and soon enough the only Blue Devil I could identify enough well to shout was Coach K himself.
Which brings us back to the apocalypse. After his year-long farewell tour, K will be exorcised one way or another in about 72 hours. There is another young manager in the league, following in the footsteps of the undisputed king. Will the old lion roar once more, or will the young lion have his own day?

In a sense, it’s a game we’ve seen before. No matter who wins, we’re witnessing the changing of the guard in a tradition that has forged the best college basketball has to offer for four decades. And whether you’re a Duke fan or a Carolina fan or just a college basketball fan, your life has been enriched. Think of the countless hours of joy, angst and passion we have all felt over the years, then consider the number of hours of training and preparation that coaches and players have put into it. It is astonishing and humiliating.

I hope like hell that Hubert Davis, my old geology lab partner, leads the Heels to victory tomorrow. But no matter what, I’m grateful to have been able to watch this extraordinary geyser of human achievement and competitively fueled passion that has erupted virtually every year since I was a child. I thank Mike Krzyzewski for continuing to improve Duke and Carolina.

To make my life better.