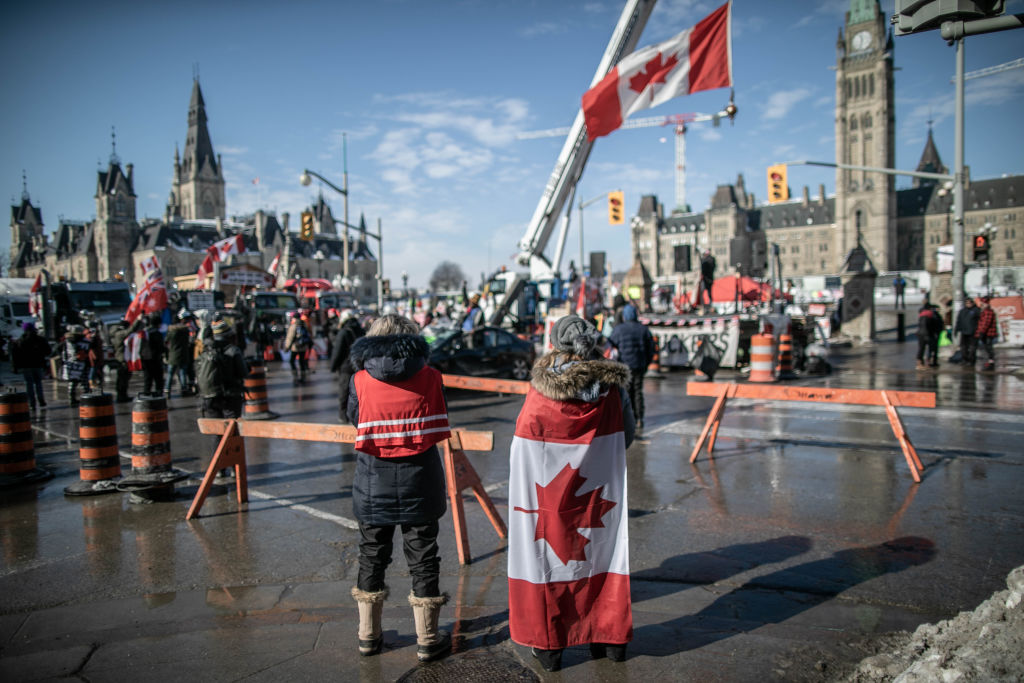 Two months ago, a convoy of extremist truckers and their allies occupied Ottawa. For most of February, the nation’s capital was under siege, with occupiers harassing residents while a complacent, gullible and often sympathetic police department did nothing. Poor communication and planning between local, state, and federal governments allowed convoy occupants to further entrench themselves.

The occupiers were apparently in town in the name of ending vaccination mandates. In fact, they were there serving various grievances and engagements that ran the gamut from COVID restrictions and labor and affordability issues to blatant white nationalism. The Occupiers’ catch-all promotional framework was the right’s favorite abstract name: freedom.

Now another convoy is organized, Rolling Thunder Ottawa, which is due to descend on Parliament Hill on April 29. It remains to be seen if anything will come out of this mimicked manifestation. It may be that the Freedom Convoy’s energies have been exhausted, at least for now. In March, the convoy made a brief tour around Ottawa, but failed to attract media attention or engage many participants. Nevertheless, the threat of the resurgence of the occupiers must be taken seriously. So does the fact that, although they have left Ottawa, the members of the convoy are still there, harboring their grievances, linked to each other on social media and through organizing tools.

Some of the occupiers, no doubt, flocked to the Conservative Party leadership campaign of Pierre Poilievre, a quasi-populist ideological arsonist committed to the libertarian politics of Thatcherism. In February, Poilievre said, “I’m proud of the truckers and I’m with them. His campaign is anti-statist, anti-tax, anti-mandate and pro-oil and gas – seemingly tailor-made for the occupier crowd.

Poilievre also talks about the anger, frustration, anxiety and grievances of young Canadians, particularly around housing affordability. Millions of Canadians have been shut out of the home and rental markets as the country stutters on supply, allows big business to buy units at leisure and refuses to build enough non-market and public units.

During the pandemic, the left has been largely missed. So far, no political force has challenged Poilievre’s rise. While he and the hidden convoy movement build on their shared affinity, the left seems to have given up on the ground. Canada’s institutional left — to the extent it exists — seems unable or unwilling to speak to the populist impulses of those who are drawn to the movement but may still be reachable. He thus left a ripe political space for a pro-youth, pro-worker agenda in the hands of cynical right-wing operators.

Convoy organizers and their supporters, as well as Poilievre and his people, profit politically from issues that are normally the bread and butter of the left — issues like good jobs, housing, health care and sick leave. While many of those who support convoy politics may be out of reach – extremists with whom one cannot reason or convert – it would be foolish for the left to cede this ground entirely. Indeed, the left should pursue a policy of conversion, a policy that can redirect the anger of these people. In an article that advocated “inclusive left populism,” Emma Jackson advised exactly this policy and laid out lessons the left can learn from the convoy.

Much like Reagan Democrats in the 1980s — working-class voters who ditched the Democratic Party for Ronald Reagan — disgruntled workers are now flocking to support Thatcherites like Poilievre who promise “freedom.” This is a cohort of voters who are looking for a political home that will offer them solutions to the myriad problems they face day to day. The left does not seem interested in offering them solutions. As a result, they no longer look to the left for a house. And the right is happy to serenade them with its siren song.

It doesn’t help, of course, that in Canada the consultant class dominates the country’s social democratic party, as argued by Martin Lukacs in his criticism of the New Democratic Party’s parliamentary support agreement with the Liberals. in power. The NDP seems terrified of its own shadow and scared of socialist politics – even scared of the word itself. The group seems more interested in asking, “Why can’t we all get along?” than to throw his hat into the ring of political protest and fight for leftist voters.

Worse, the party is also torn by competing provincial interests in jurisdictions where it can form government by gravitating towards the center and caving in to the interests of capital and industry, such as the oil and gas industry in Alberta. From time to time, the party strikes Faustian deals for small gains – like NDP Premier John Horgan supporting the Site C dam in British Columbia – but in the long run, these deals undermine any chance of achieving a coherent leftist movement across the country. Such deals often undermine popular mobilization and take the breath out of any intellectual and organizational apparatus that might support them. As a result, the party is unable to respond to the political difficulties of the day. The party is stuck on the outside and looking in, as voters are gripped, one by one, by unsavory alternatives to unapologetic left politics of anger recognition and problem solving.

To reach new voters, the left must solve at least two problems. The first is to find a way to reach disgruntled workers and communities without giving an inch to racists, sexists, xenophobes, homophobes and anyone who practices the politics of identity exclusion. The second is to resist the urge to resort to liberal “third way” politics. The Democratic Party’s response to Reagan’s republicanism in the United States and the Labor Party’s rise to power in the United Kingdom in the 1990s offer us no less than what do not To do. Just as they failed to solve the problems of the past, Third Way policies will not solve contemporary problems.

Canada’s sleepy left must find a way to connect and convert disgruntled young voters and angry older populists. This is the only way to prevent the policies of withdrawal, hatred and extremist violence that so often accompany moments of political conflict caused by generalized hardship. But this requires an unabashed commitment to left-wing socialist politics based on the transfer of market power to workers and the expansion of the welfare state beyond the constraints of liberal orthodoxy in an agenda of structural transformation. The best time to adopt such an agenda was before the rise of toxic populism and Thatcherite libertarianism. The second best time is now.

Comparison of Bread Financial (BFH) and the competition