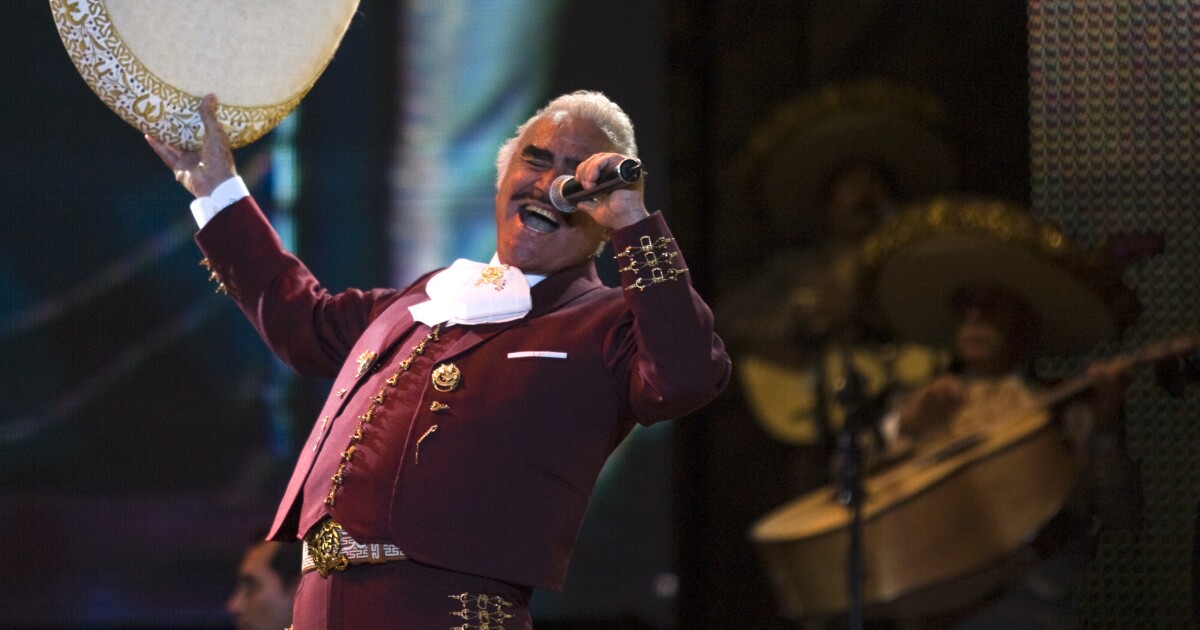 Chronicle: Vicente Fernández’s journey was that of our parents. May they live long

This fall has been a season of death for the people of my ancestral town of Jerez, Zacatecas.

The daughter of a classmate of mine at Anaheim High passed away last month. A legendary East Los Angeles chorizero – a chorizo â€‹â€‹maker – lost their battle with cancer last week. The father of a dear family friend died on Wednesday.

The deaths weigh on my father, who now attends the funeral and wakes up as he used to go to baptisms and quinceaÃ±eras. Jerezanos in Southern California easily number in the thousands, and Papi seems to know them all. He’s 70 now, in the fall of his life, a once manly man now grayer, leaner, slower and calmer.

Since my mother died two years ago from ovarian cancer, Papi has become existential as he tries to put his house in order for the day he too leaves us. So when I called him this morning to tell him about the death of Mexican music and film icon Vicente FernÃ¡ndez, I didn’t know what to expect.

Fernandez’s death was not shocking. Millions of fans across the United States, Latin America and beyond have kept vigil since August, when the man surnamed Chente fell on his ranch in the Mexican state of Jalisco and injured his column. vertebral.

It’s the end of an era, that’s for sure. FernÃ¡ndez bridged the gap between the original Mexican matinee idols and today’s stars in a decades-long hit parade matched in American song only by Frank Sinatra. But that heritage was not on my father’s mind when I broke the news to him.

He was never the biggest fan – in our family his compatriot zacatecano Antonio Aguilar was king. I don’t really remember the last time dad played his music. Still, my dad was calm when I broke the news.

â€œHow sad,â€ Papi said slowly. He was a little silent. When he spoke again, his voice trembled. “That in paz descanse“said Papi. May he rest in peace.

Papi mourned FernÃ¡ndez – and also for himself and his generation of Mexican immigrants to the United States.

They saw Chente not only as an avatar for mexicanity, like a swashbuckling macho with a mighty mustache and a voice that could tear down the walls of Jericho. This is how my generation of Mexican Americans and those younger than me will remember FernÃ¡ndez.

Chente was more than a caricature to our parents, especially our fathers and uncles – he was them at every stage of their lives in the United States, where he eventually became more popular than in Mexico.

A minute after hanging up, Papi called me back (he always does that). Now his tone was happier. He was suddenly 18, a self-proclaimed mojado – a wet back – who had just arrived in East Los Angeles in 1969 to join his brothers in a new country. The soundtrack in all the bars on Olympic and Whittier boulevards at the time? ChentÃ©.

“They blew up the volume on the radiola! “said my father with joy, saying the names of the canteens he had long haunted – El Hernandez, La India Bonita, Flamingo Inn – and the great songs of Chente at the time,” Tu Camino y El MÃ­o ” and â€œEl Remedio.â€ Grandpa laughed at the memory, then said, â€œAnd we drunks would scream and throw away our cervezas and sing.

What particularly delighted my father and his friends was the way Chente always shouted his own village of HuentintÃ¡n, Jalisco. In a time and place where Americans and even Mexicans shunned Mexican immigrants, my father and his peers felt seen and their way of life validated.

The triumphs of Chente became the triumphs of dad and his generation as they found their own success. The singer has gone from performing in former movie palaces in downtown Los Angeles to arenas and stadiums in Southern California and beyond. My dad and his brothers went from sharing beds to buying their own suburban homes.

The star and his conquered fans the North by embracing rancho libertarianism, a philosophy that celebrates bootstrap individualism in a way that makes Ayn Rand look like a community hippie. His songs documented the pain and pride he and his fans went through in their lifetime. There have never been any excuses for difficulties – just the pride of being able to overcome them.

Latinos became the largest minority in the United States as Chente and my father’s generation grew older. My Generation went from hearing Chente as the forced soundtrack of our weekends – it stayed on the radio even as we begged our parents to let us play Nirvana or 2Pac – to an act of nostalgia. He, like our parents, passed into the realm of myth, until he was no longer quite human but living relics.

Their style of mexicanity is now in its winter. Machismo, the moral code that has defined Mexican virility for centuries, is no longer despised or accepted. Immigrants from Zacatecas and Jalisco no longer dominate the social and cultural life of Southern California – they are now the people of Sinaloa, Oaxaca and Mexico City. Chente’s music is now largely ceremonial, not contemporary.

And as those days draw to a close, their reconsideration is in full effect. Right now on social media, critics are listing Chente’s mistakes – his performance at the 2000 Republican National Convention, the homophobic and sexist comments over the decades. FernÃ¡ndez got in trouble as recently as January when a photo of him groping a fan went viral online, a transgression the octogenarian apologized for even as he tried to pass it off. for nothing.

No one will miss those moments or the worldview that tolerated them. But these flaws are also a reminder that the whole of someone’s life has to replace their mistakes. Chente’s life is a way of seeing our parents as they were and are – imperfect people whose exploits inspired us to try to match their height instead of emulating their flaws.

That’s why the soundtrack in Southern California this Sunday is Chente and will be for the next few days. I’ve already heard my middle-class Chicano neighbors, those whose Spanish is worse than mine, explode his music. The same with the taqueria near my wife’s restaurant and the random cars passing by.

I also play Chente – to honor his legacy, but also the elders in my community who we have lost in the past two weeks and will lose in the years to come. To mark the end of an era, and to think about the future for us.

I’m going to blow up Chente and think of my father – an imperfect man who has nonetheless accomplished great things and is now waiting for his day to come. The song I play on repeat is “Paloma Errante” (“Wandering Dove”), a 1970 track that topped the charts right after my father arrived in East LA.

“I lift my prayers to the sky / So that it calms my suffering” sang Chente – almost cried. “Eternal God, do not forsake me / Give me joy and the future.”

That dance in peace, mid-Chente.

To face global threats, US urgently needs to repair democracy at home