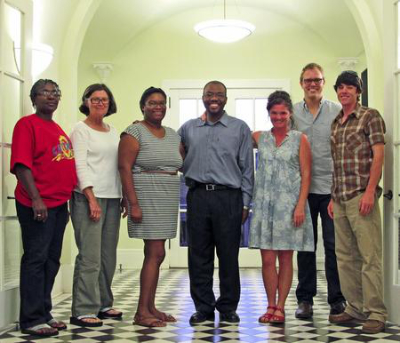 Determined to remedy this problem, a group of community actors established the Delta Fresh Food Initiative in 2010. Delta Fresh uses mobile markets provided by community farms to expand access to locally grown fresh food, improve diabetes and obesity, and increase economic opportunities for local farmers. In Bolivar County, in northwestern Mississippi, where the organization has focused its efforts, 37.5% of adults report a body mass index at the level of obesity, and 16.5 percent report a diagnosis of diabetes. To eliminate these health problems, Delta Fresh has provided more than 5,000 residents of northern Bolivar County with fresh fruits and vegetables.

By tapping into the sustainable community food systems that already exist in the delta, the organization, made up of producers, donors, health and agriculture educators, food retailers and community organizations, aims to strengthen supply and demand for fresh food. To this end, Delta Fresh also provides training and technical assistance to sustainable producers, consumers and advocates, as well as young people interested in developing community food systems.

In addition to running farms, young Delta Fresh Trains surveyed community members in 2017 about the barriers they face in accessing fresh produce and found that 88 percent of respondents would support a mobile market increase the number of locally grown foods they could buy. Now, four years later, the Delta Fresh Foods Mobile Produce Market has provided local fruits and vegetables to thousands of residents and, if needed, they can use SNAP benefits to shop. On the supply side, local producers who provide fruit and vegetables receive allowances to participate in the mobile market.

While Delta Fresh has focused its work in northern Bolivar County, the organization’s goal is to replicate its efforts statewide, and it has already extended its reach to Quitman and Hinds counties. Hinds is home to Jackson, the state capital and most populous city; Jackson is 82.2% black, which also makes it one of the most African-American cities in the country. TO 25.4 percent, the city’s poverty rate is more than double of national poverty rate of 11.4 percent, indicating why food insecurity and other socio-economic problems persist there. But wherever Delta Fresh’s â€œright food revolutionâ€ goes, its leaders say, the initiative takes into account the specific needs of the communities it serves.

Julian D. Miller, co-founder of the organization and long-time member of the board of directors, works as a lawyer and director of the pre-law program at Tougaloo College in Jackson and as an assistant professor of political science there. He has helped Delta Fresh receive over $ 1 million in grants to develop local community food systems. Civil Eats spoke with Miller of Delta Fresh, along with food insecurity in Mississippi, the importance of involving young people in food advocacy, and the link between food justice and civil rights movements.

What is the origin story of Delta Fresh?

It is the second poorest region in the United States behind the Appalachians. Historically, it has some of the most fertile soils in the world, but the reality is that it is dominated by corporate agribusiness, and local producers capture a [miniscule] quantity of the food market in the Delta. Due to the agrarian nature of the area, the legacy of slavery, the level of poverty, [the area] has been marked mainly by low-wage jobs and the exploitation of workers.

How did you get involved in this work?

I’m a fifth-generation Mississippi Delta for life [resident]. After college, before going to law school, I did anti-poverty work for an organization, and the goal was to understand how to build collective action and project approaches that can be exploited to solve long-term chronic problems of economic injustice and poverty in the Delta. Naturally, the idea of â€‹â€‹developing the work of the food system was really gold, as it touched both economic justice and the exploitation of workers and wage issues, as well as preventive health, to deal with the chronic diseases.

Then I got together with a huge group of farmers and organizers in 2010. One group was committed to greener agriculture and had already pioneered organic farming in the 90s. It was about Delta farmers, mainly from Bolivar County, led by Dorothy Grady Scarborough, who is a legend and a pioneer and who guided me in this work. So we had producers, farmers, health professionals. We had about 125 organizers who came together to form this organization, Delta Fresh Foods.

What did Delta Fresh set out to accomplish when it first started out?

In 2010, when we started, we completed over 30 community garden projects. We started the Mississippi Farm to School project. We have started bringing in school districts so that they can ask local producers to supply their cafeterias with food. But we wanted to find a way to develop a sustainable food system, community by community, county by county, that would be unique to these particular counties and communities in the delta, and that way we can make local citizens take ownership of it.

The goal is to supply the school cafeteria to allow students and faculty to access fresh, local food and to reach out to the wider community.

Then we decided to focus on Bolivar County, where I come from and where many of our co-founders come from. It was a good fit, and we had very good partnerships there with the local producers. Additionally, Alcorn State University had a demonstration farm in Mound Bayou, Bolivar County.

In 2017, thanks to a generous grant from the Bolivar Medical Center Foundation, we started working on our youth-led projects. From there, we developed a youth-driven mobile market in partnership with six producers, and we traveled to sell local produce. Then we developed our own six acre farm run by young people. We aim to scale this model and be a model for other countries to replicate the development of the food system.

Bezos and Boeing to build business park in space – Slog