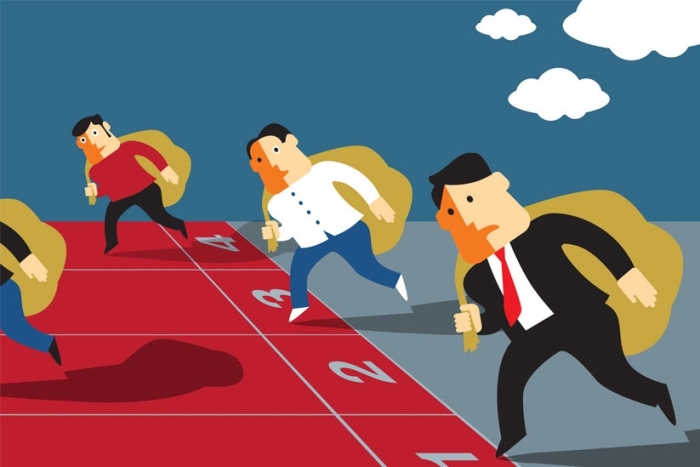 The Prime Minister has declared January 16 “Start-ups Day” to highlight the importance of start-ups in the economy. Technological advancements and innovations have indeed opened up new frontiers of economic growth and brought new players into the market to enlarge the economic pie. Last year alone, 42 unicorns (worth over $1 billion) emerged in India. A study reveals that 90 of the 1,078 founders among 500 American unicorns between 1997 and 2019 were born in India, topping the list of these immigrant founders.

These are encouraging developments that prove that Indian talents can innovate and compete with the best in the world, given a fair chance. India has witnessed a boom in the IT sector over the past three decades with the rise of global players like Infosys, TCS and Wipro, providing jobs and income thereby contributing significantly to growth in the post-liberalized economic paradigm.

But such miracles cannot happen if competition in the open market is stifled and the level playing field is skewed in favor of the privileged few at the expense of others. Two of these areas stand out and need to be addressed: protectionism and clientelism.

The budget presents the right opportunity.

The Prime Minister’s welcoming approach to start-ups goes against the protectionist policy the government has followed by erecting trade barriers – raising import tariffs and abstaining from the free trade agreement between Asia-Pacific nations, Regional Comprehensive Economic Partnership (RCEP) in 2019. There is not only very sound economic logic to promote free trade for high-return production of goods and services and growth , India’s past experience has shown that it enjoyed robust export growth after trade liberalization in 1991.

Moreover, India also witnessed the downsides of protectionism that accompanied the infamous permit-permit-raj in the 1960s and 1970s. As domestic industries flourished, Indians grappled with goods and services of low quality and high cost, exports were low (because not globally competitive) and the growth rate remained below 4% – derisively described as the “Hindu growth rate” in the literature.

That is why when the 2020 AatmaNirbhar Bharat Abhiyan sought to shield domestic industries from competition in the name of promoting self-reliance, even the government’s staunchest supporter, former NITI Vice President Aayog , Arvind Panagariya, hesitated and advised against. Arvind Subramanian, who served as chief economic adviser to the Ministry of Finance from 2014 to 2018, wrote an article titled “India’s Inward (Re)Turn: Is it Warranted? Will it work?’ in October 2020, with fellow economist Shoumitro Chatterjee of Pennsylvania State University, to caution against the move.

Their article provided evidence and economic logic to argue that import substitution had already failed in India and would fail again because, among other things, India’s domestic market was not large enough to provide the impetus for growth as the global market can. They were the first to reveal that India had already reversed trade liberalization policy in 2014 by erecting import barriers. They wrote: “Since 2014, there have been approximately 3,200 tariff increases at the HS 6-digit level (on most favored nation imports), a surprisingly large increase. As a result, the average tariff rose from 13% to almost 18%. The largest increases took place in 2018, when there were almost 2,500 tariff increases representing almost 4 percentage points. We estimate that tariff increases have affected import categories that amount to about $300 billion, or about 70% of total imports.

Why have exports fallen?

This is because exports are tied to imports, which economists call “import intensity” or import components of exported goods. In the post-liberalized era, imports of raw materials and intermediate goods have increased and contributed significantly to export growth. A study by the Institute for Industrial Development Studies (ISID) found that import intensity increased from 10.5% in 1993-94 to 32.5% in FY 2014 for India. economy as a whole and from 12.9% to 51% for the manufacturing sector (in the case of petroleum products, the jump rose from 5.8% to 91.4%). Thus, if imports fall, exports also fall and the prospect of export-led growth suffers.

Given that the pandemic has caused massive losses of income (loss of jobs and businesses), the little support that the internal market could provide to stimulate growth under a protectionist regime, is also diminished. In any case, India’s middle class (the main consumer class) was too small at around 1-2% of the population in the pre-pandemic period, Subramanian and Chatterjee had estimated in their paper, unlike the 25% of the China. So while the domestic market may play an important role in China’s growth, India does not.

In another questionable decision, India left the new RECP free trade group in 2019, after years of negotiations to protect domestic producers. The RECPs group the countries that contribute up to 30% of the world’s GDP. Protectionism can be good policy. It’s bad economics.

Say no to cronyism

The other big counter-intuitive move is the promotion of crony capitalism. This is bad because it damages the level playing field, distorting the playing field to suit a select few at the expense of everyone else in the market. It also creates financially and politically powerful corporate entities beholden to a particular party and its government for such favors, thereby posing a threat to democratic rule and good governance.

To date, the dramatic growth of two particular industrial houses has been highlighted by none other than former CEA Arvind Subramanian as two ‘A’s. Some may say that during the license-permit raj and subsequent era of liberalization, India also witnessed cronyism. While this is true, it should be borne in mind that cronyism began to recede in the era of liberalization and there were fewer trade barriers, allowing new entities like Infosys, TCS and Wipro to become true global players.

Arvind Subramanian’s 2 A’s, the Adani and Mukesh Ambani groups, are emerging as the most dominant players in the agricultural trade and green energy, causing anxiety in many quarters. A single group, Adani became the largest airport operator in India by taking over all public airports privatized since 2014, despite having no previous experience or expertise in airport management and despite strong objections from the Ministry of Finance and NITI Aayog on building a private monopoly.

Take the case of yoga guru Ramdev’s business empire. Is it a coincidence that right after announcing its foray into oil palm plantation in Assam, Tripura and other northeastern states (via the newly acquired Ruchi Soya), Center offered the crore of ₹11,040 National Mission on Edible Oils-Oil Palm (NMEO-OP) in August 2021, despite Indian Council of Forestry Research & Education (ICFRE) red flag? The pandemic has also seen Ramdev’s untried and untested herbal ‘Coronil’ being promoted by central ministers on false claims that the WHO has endorsed it, which the latter has denied.

What makes cronyism to the detriment of the public sector and other private entrepreneurs, as well as protection from competition, even more dangerous is the opaque electoral nexus that allows a unanimous, unlimited and uncontrolled flow of uncontrolled money accounted for from private entities in India and abroad to political parties. Such a flow of private funds can only rig governments and public policies to serve private interests.

Vietnam’s path on COVID-19 and corruption