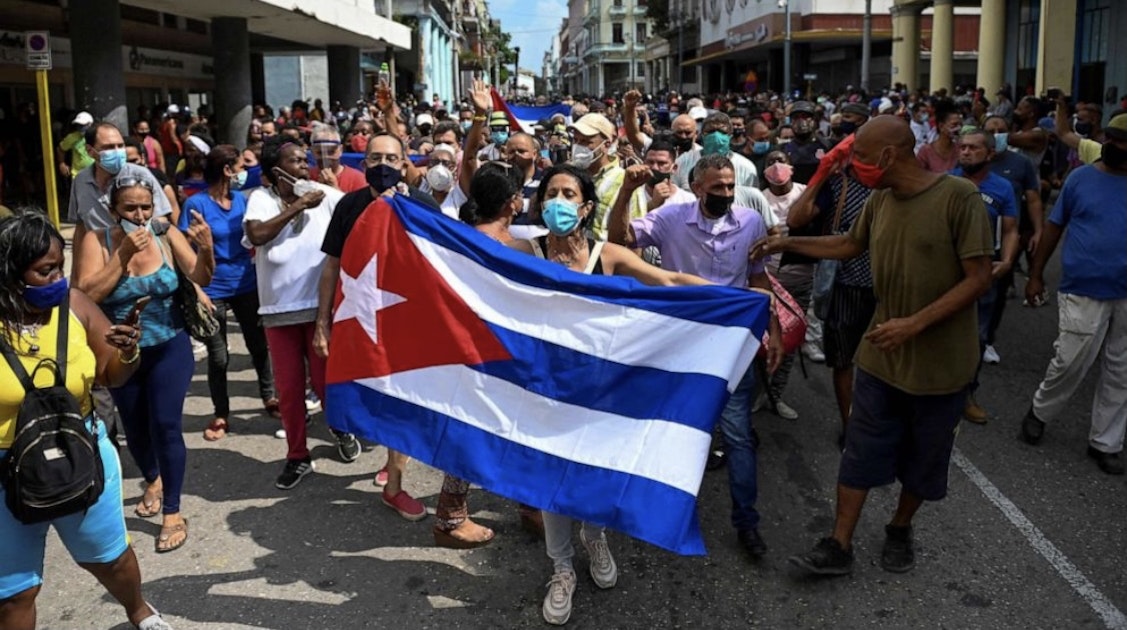 In last week’s column, I mentioned the bizarre spectacle of The New York Times correctly calling (some of) Cuba’s current wave of protests “anti-government” while Fox News (and libertarian Anthony Fisher) were unusually keen to tone down the implications of the protests, their rough consensus being that the protests could be anti-communist but not inherently anti-government, as if it makes sense to cut corners about it in a place like Communist-run Cuba.

Biden’s bland administration initially appeared to endorse the view that the protests were limited in scope – opposing COVID lockdowns, the spread of COVID and shortages – but the administration has since his honor, clarified that (some) of the protests are both anti-government and anti-communism and that communism – and socialism to boot – are broken systems. Good for Biden.

But a wave of left-wing academics on Twitter was quick to assert that the real meaning of the protests (as a few flags and placards in the crowd supposedly attest) is pro-Communist (at least one large rally l ‘was) and the problem with the current Cuban regime is that it has not remained faithful to the principles of the revolution. Tweeters can hope that’s true, and you can’t fault them for spotting the flags and slogans they prefer, but keep in mind that rebellious crowds often express their outrage in the language of the current regime. , even if they don’t particularly want this long-lasting diet. This gives them some sort of common language and decreases their chances of getting shot.

The 1989 Tiananmen Square protests in China were a jumble of pro-democratic denunciations of the Communist Party and almost Maoist accusations that the Party had betrayed the basic tenets of Marxism and thus fell into corruption. Accusations of hypocrisy are powerful elements for protest purposes, even when protesters do not necessarily want a consistent adherence to the violated principles. Tiananmen protesters have contradicted Chinese calls for social democracy at the occasional Statue of Liberty symbol, favorable to the United States, and (much to the chagrin of some leftists) there have also been American flags among the protesters. Cubans.

The confusion on the left should also not be seen as a sweeping endorsement of the US government’s policy towards Cuba, which currently includes a triple whammy of economic blockade, patrol boats preventing the emigration of refugees and the murmur. occasional very calm in favor of military intervention (which, coincidentally or not, could be aided by the overthrow of the neighboring government of Haiti by what appear to be combatants trained in Colombia with the help of the United States in part during the presidency of Bill Clinton, who molested Haiti). None of these policies are libertarian or pro-market.

If journalism is, as they say, the first draft in history, that first draft is a mess of what tends to solidify in the history books years later, right? For now, you can choose from the mainstream media telling you that the protests in Cuba are anti-government, pro-government, anti-communist, pro-communist, anti-US blockade, or a purely internal matter depending on your political preferences. , especially if you avoid uncertainty and nuance.

Is the prevailing consensus – coincidentally or not the kind of consensus that “moderates” in US intelligence agencies tend to like – that we want soft pressure on the Cuban government, not sudden violent upheaval, and for the love of God, not so much an upheaval that could the masses of the whole world begin to have revolutionary ideas?

There have been more delicate analytical swamps across the world over the past decade, however, including theories galore as to what the “Arab Spring” meant for the future of freedom in this region, if l he Obama administration dropped the ball by not overwhelmingly supporting the Iranians. anti-government protests under his watch (Biden and his colleagues were anxious at the time to find a bribe / costly arms control deal with the regime), and so various subsets of the Chinese population within the meaning wide from Tibet to Taiwan have a hope of making common cause against Beijing. (Given people’s reluctance to present abstract and radical anti-Communist arguments today, we may have to settle for little empirical information about what the future may hold in store for us, like the new documentary on the unrest in Hong Kong which was unexpectedly unveiled at Cannes.)

The global struggle against communism leaves us with countless tricky strategic and pragmatic questions, whether the “color revolutions” of Eastern Europe were genuine (and how much that matters) or whether William Shatner’s new talk show on RT (formerly Russia Today), titled I Don’t Understand, will make him an unwitting tool of Russian propaganda. I’m inclined to think he shouldn’t be doing the show on this channel, but then I think PBS should cease to exist, because of the anti-government principle.

The world makes so much more sense if you abandon right / left tribalism and nationalist tribalism and adopt consistent anti-government principles: End the blockade of Cuba. End communism. Put an end to governments of all stripes, everywhere, including here, even if it means saying no to charming social democratic demonstrators waving flags. Stick to property rights, a price system that works and not or, if you insist, very little government.

Along the way, watch for new opportunities for protest and rebellion. A study suggests that two-thirds of Republicans in the South would like to secede from the United States. Let them go and encourage others from all factions to follow. Certainly, blockade fatigue is also turning into an educational opportunity spanning the political spectrum about the limits of public patience with regulation. Does anyone (who isn’t a pro-government fanatic) like the idea of ​​a massive government crackdown on, say, contraband alcohol or houses with peeling paint on the outside? after everything the government has done to us over the past year and a half? It should leave us alone now.

The new talk about the United States demanding women sign up for the project could somehow turn into another right-versus-left moment, but it would make a lot more sense if it became a moment that united the left ( outside anti-militarism), the right (by anti-feminism), the far right (by anti-imperialism), the libertarians (as opposed to any coercion) and the conventional libertarians against the government (and particularly against the military complex). industrial). I look forward to all the mainstream intellectuals and media out there trying to spin this one if it gets out of hand, struggling to reserve “both sides of the problem” in the usual TV shows.

That’s enough to make you hope that Selective Service tries – and if the surprise result is that the whole world is united against the liberal feminists of the military establishment (Hillary Hawks, if you will), then let it be. so be it. The hippies of old would have understood. Even me, admitting that and seeing these hippies as natural allies, some wall crumbles. Be rebellious girls, not the weapons of anyone’s establishment.

—Todd Seavey is the author of Libertarianism for Beginners and is on Twitter at @ToddSeavey.

how anti-vaxxers, conspiracy theorists and the far right came together over COVID

Ross Douthat: What if COVID-19 was 10 times more deadly? | Chroniclers