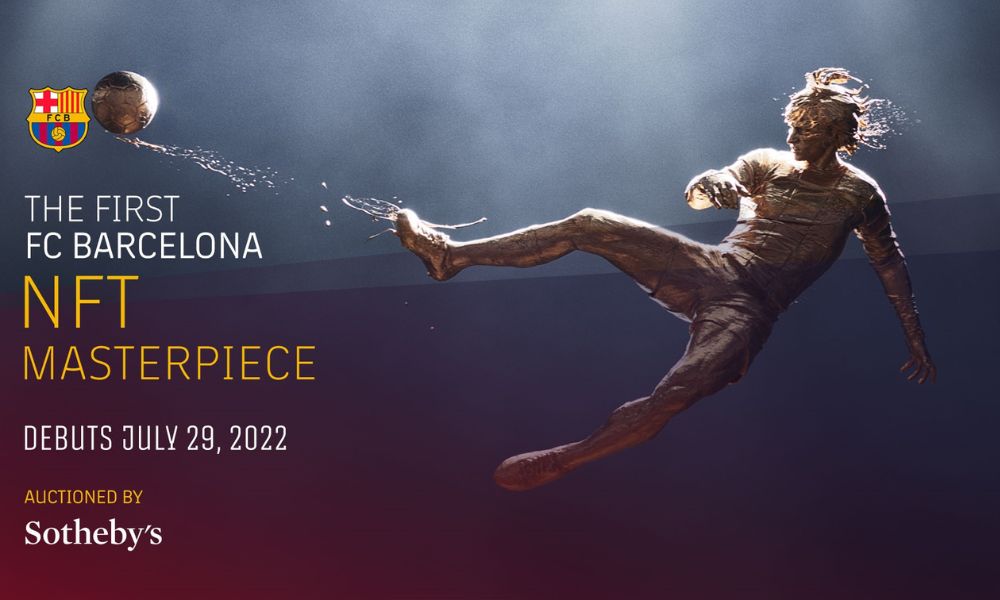 Spanish soccer giants FC Barcelona have detailed the launch of their first non-fungible “art” token (NFT) ahead of a sale at Sotheby’s auction house in New York next week.

The cash-strapped LaLiga club is positioning the digital collectible as a high-end artifact, hoping that the artistry of the NFT, combined with the promise of exclusive benefits and the power of its brand, will will ensure a high price.

The NFT is an animated “audiovisual digital artwork” titled “In a Way, Immortal” featuring Dutch club icon Johan Cruyff “flying” through the air to score a goal against Atletico Madrid in 1973.

The winner of the auction will become a ‘digital Barca ambassador’ with exclusive access to the club, the right to play at the Camp Nou stadium and hospitality rights for five years. In addition to this, they will be allowed to take part in an official handover before a friendly match.

“Barca, with over 400 million social media followers, are constantly opening up new ways to connect with our fans, and we believe that with the club’s new NFT strategy, we have found a unique opportunity to continue to develop and consolidate the Barça brand,” said Joan Laporta. , President of FC Barcelona.

“[Johan Cruyff] to be captured in such an artistic way is a great way to pay homage to Johan Cruyff, that iconic moment and all of FC Barcelona’s legacy and history.

The club hopes the sale will raise funds for the club and launch a series of NFT initiatives that will deepen engagement with younger, more digitally native fans.

The animation was created by 40 Hollywood graphic designers and visual effects artists, who spent over 10,000 hours creating the 40-second film which is complemented by a soundtrack performed by a 30-piece orchestra.

“NFTs have been too quickly associated with the explosion in demand for crypto, but with In a Way, Immortal, we are bringing NFTs back into the realm of high art,” said Eric Sas, Founder and Chief Innovation Officer. at BCN Visuals.

“Unlike the basic NFT GIF, this mini-movie is a true work of digital renaissance art – almost a piece of marble chiseled by Hollywood’s most talented visual effects artists. This project aims to become the new benchmark for the next evolution of NFTs where new digital works resemble the masterpieces of yesteryear.

That Barcelona are interested in NFTs shouldn’t come as a big surprise. The club has a huge global following and huge brand power – assets that are hugely valuable when it comes to monetizing international fans who will never set foot in its Camp Nou stadium and identifying new sources of income to help him overcome his well-documented financial problems.

It has sold its entire sponsorship inventory, including stadium naming rights, to music streaming service Spotify and US investment firm Sixth Street Partners will receive 25% of the club’s LaLiga broadcasting rights for the next 25 years.

By emphasizing the artistic quality of the collectible, he hopes to harness the power of this heritage and create something that could have real value and escape criticism from other NFT initiatives which have been described as more cynical receipts.

Editorial: The GFL fiasco offers a rich lesson in the balance of power | Editorial

Liz Cheney braces for primary loss as focus shifts to 2024