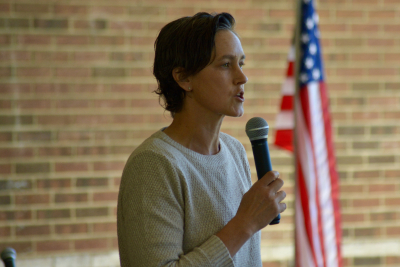 An internal poll commissioned by the Democratic nominee for NC-11 just days after the May 17 primary election suggests the race may be closer than district demographics suggest.

“Jasmine [Beach-Ferrara] begins the general election from a position of strength because its message resonates clearly with the people of western North Carolina,” said campaign manager Luke Tonat. “His approval ratings are strong, especially considering the district’s Republican leanings.”

The poll, conducted by Survey 160 between May 18 and May 20 via mobile phone text message, reached 308 likely voters from all parties. The indicated margin of error is 6 points, with a confidence level of 95%.

Among voters who have already decided or are leaning heavily, Beach-Ferrara can claim 40% support, compared to Edwards’ 46%.

Edwards also holds an advantage in name awareness with 76%, compared to 67% for Beach-Ferrara.

While internal polls commissioned by candidates can often be ridiculed due to a perceived bias in favor of the candidate signing the check, they are also routinely used by candidates to make spending decisions, making collection honest data vital to the campaigns that commission them.

Nonpartisan redistricting site davesredistricting.org shows NC-11 would normally expect Democrats to garner 43.9% support, with Republicans at 53.6% – a 9.7% gap for the Democrats.

The general election will take place on Tuesday, November 8.

The Continuing Decline of Parliamentary Democracy in India