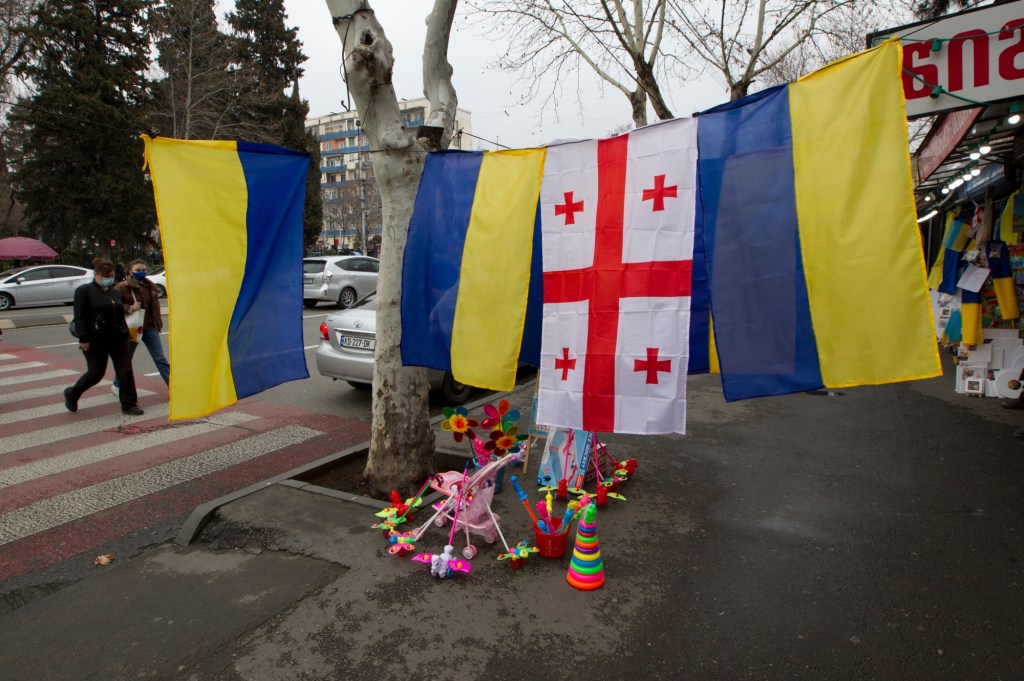 TBILISI >> Gamarjoba of Georgia, the small South Caucasian nation bordered by Russia to the north and Turkey, Armenia and Azerbaijan.

I’ve never been to American Georgia, the land of humidity, peaches and the headquarters of that horrible propaganda network called CNN, but I think I’ll prefer this one.

I’ve been hanging out here for about a week sightseeing, hiking, visiting old soviet era landmarks, eating all the khachapuri, khinkali and lobio I can get my hands on and drinking all the wine, everything wine. They’ve been making wine here for around 8,000 years and I can confirm they know what they’re doing.

But what I also did was of course meet Georgians, but also people from all over the world, from Germany to Saudi Arabia to Ukraine.

Speaking of Ukraine, for obvious reasons, the Georgians I met are particularly supportive of the Ukrainian people. Ukrainian flags hang from the windows of homes and businesses in Tbilisi. Throughout Tbilisi, one can quite often see graffiti reading “F——— Russia/Putin” and “Rasha Go Home”, the latter being a reference to the tens of thousands of Russians who have settled in Tbilisi since the beginning of the war.

Since a war with Georgia in 2008, the Russians have occupied two breakaway regions of the country, one to the east along the Black Sea (Abkhazia) and the other to the north (the Tskhinvali region). Despite this, most people I’ve met are skeptical that the Russians will attack again anytime soon, although the possibility is still there.

I’m going to avoid doing this thing where I pretend to know everything there is to know about Georgia just because I’m visiting it.

But here’s what I knew before I even came to Georgia: Over the past two decades, Georgia has earned a favorable reputation for having a relatively high degree of economic freedom.

The Heritage Foundation’s 2022 Index of Economic Freedom ranks Georgia 26th in the world, just behind the United States.

The most recent report on economic freedom in the world co-produced by the Cato Institute, the Fraser Institute and dozens of free market think tanks ranked Georgia 5th in the world, with relatively minimal business regulations, policies lax trade policies and relatively weak trade policies. rate of public expenditure overcoming weaknesses related to the strength of the national monetary system, property rights and courts.

On this last point, Heritage also noted: “Property rights are recognized but weakly enforced, and unclear or unregistered title deeds can hamper investment. Political interference undermines the independence of the judiciary. Many judges do not have the capacity to adjudicate commercial cases independently or expeditiously. Transparency International cites “elite” corruption in Georgia: high-level officials exploiting legal loopholes for personal gain, status or retaliation. »

More on that in a minute.

But for the positives of Georgia’s economic system, Georgia’s big deregulation came after the Rose Revolution of 2003, which toppled President Eduard Shevardnadze, who had held various leadership positions in Georgia since the Soviet era. The Rose Revolution saw American-educated Mikheil Saakashvili become president.

Saakashvili, in turn, pursued a vigorous free-market approach to government. He appointed Kakha Bendukidze, a libertarian businessman and philanthropist, to reform Georgia’s economy. Under Bendukidze’s watch and influence, Georgia rose from 100th in the world in 2006 in the World Bank’s “Ease of Doing Business” index to 11th in 2010.

The results were impressive. According to the Georgia FactCheck project, supported by USAID and others, the Georgian economy grew by 70% between 2003 and 2012 and per capita income quadrupled.

Now, I should stop here to note two things: First, Saakashvili is now in jail, apparently for abuses that occurred on his watch. He claims to be a political prisoner. And, secondly, the current Prime Minister, Irakli Garibashvili, has disavowed limited government approaches, saying in 2021 that “the idea of ​​a small government is a myth that hampers the development of the country”, and called for more major government intervention in the economy.

So things are a bit complicated here.

Yet on the economic front, Georgia’s free-market policies largely remain in place.

Conversations with Libertarians in Georgia

As mentioned earlier, free market groups have pointed to things under government control — property rights protections, courts, and the monetary system — as areas of persistent weakness for Georgia.

And to this point, two local libertarians I interviewed pointed to these problems, and more, as issues requiring libertarian solutions.

“Without Fixing [the courts] I don’t know how we can go from a Soviet country to a normal, rich country where you can find happiness and find yourself,” Herman Szabo, an MP from the New Political Center-Girchi party, told me.

Szabo, a libertarian influenced by thinkers like Milton Friedman, calls not only for judicial reform but also for a broad decentralization of government in Georgia.

“We want more decentralization and for local community members to make decisions in [things that impact] their lives,” he says, arguing that judges and local police officials should be subject to elections.

Revaz Topuria, a lecturer at the Free University of Tbilisi and the University of Georgia, shares concerns about the legal and legal system in general, who says that while it is easy to start a business in Georgia, “the courts are very pro-government,” jeopardizing property rights. He continued, “People don’t realize how important a justice system is to having a normal democratic country.

In separate interviews, Szabo and Topuria also highlighted education, which is subject to rigid regulation, as an area in need of reform in Georgia. Charter schools are not a thing here, while even private schools are subject to top-down regulations. Szabo and Topuria say the status quo in Georgia is stifling young people’s ability to learn what they should be learning.

“We need to deregulate the education system. We must allow schools to teach children what they think is necessary and as a parent [I should be able to] decide for myself where my children should study,” said Topuria, who noted that the public education system in Georgia is largely centralized with minimal flexibility.

“They don’t see education as a product and they don’t think the market can provide different varieties of this product for different means,” Szabo said of the resistance to allowing more freedom in education. “It’s as if the modern Georgian education system treats every sick person with the same pill.”

Topuria is doing its part to try to supplement the learning capacity of young people through an association he co-founded, the Franklin Club (franklin.ge), which offers courses and educational activities in political science. and economy. This initiative, sponsored by the University of Georgia and the free market Atlas Network, has already produced 1,000 alumni according to Topuria. It’s a beginning.

And, yes, it is named after our very own Ben Franklin.

Szabo undertook his own efforts to make free market ideas accessible, including producing translations of libertarian works. He is currently working on the translation of Walter Block’s classic book, “Defending the Undefendable”.

Prospects for a freer Georgia

But of course, libertarian reforms require meeting a number of difficult challenges.

Szabo hopes the relatively low level of regulation, combined with the fact that modern Georgia is a relatively young country and that Georgians have a general skepticism of government, means that libertarian ideas may prevail.

Szabo and his party plan to promote sweeping sweeping reforms, including a plan to “privatize Georgia,” by selling off public land in Georgia and ensuring that all Georgians can participate in the plan. Szabo’s party, which is known for its eye-catching efforts like opening a brothel and registering a church to help members get exempted from compulsory conscription, is certainly radical, but I admire them. to fight shamelessly for freedom.

Topuria, who prefers to identify as a classical liberal rather than a libertarian because of the more negative connotations here with the latter term, is well aware of the institutional barriers to freedom. Not only are many people essentially being bought off before the election, he says, or lured in with false promises, but it has recently been revealed that the government engages in surveillance of political dissidents, journalists and diplomats.

Still, Topuria is encouraged by the Franklin Club’s early success and the serious enthusiasm of the club’s youngsters.

“We are growing very fast,” he said. “I hope the next time you’re here we’ll have a different discussion. The situation for the government will probably be the same, but for Franklin, I hope it will be a little better.

Sal Rodriguez can be reached at [email protected]