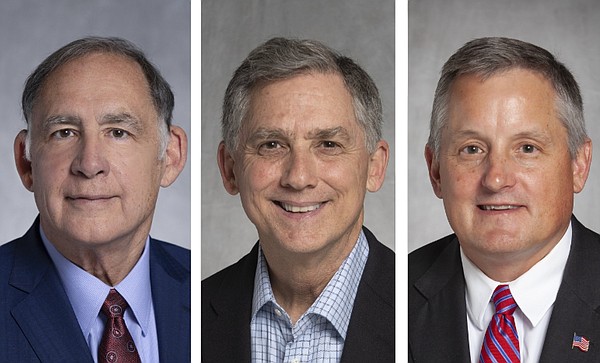 WASHINGTON — Arkansas Republicans seeking re-election to Congress are dominating their Democratic opponents on the fundraising front months before the November general election, according to the latest filings with the Federal Election Commission.

The campaign of U.S. Senator John Boozman, who is seeking a third term in the Senate, brought in $787,428 from May 5 through the end of June, according to an FEC report filed Friday.

“We are thrilled with the continued support and momentum of this campaign,” Boozman’s campaign said in a statement Saturday.

Boozman, a Republican from Rogers, won the Republican Senate primary in May, fending off challengers from the right.

Realtor Natalie James of Little Rock is the Democratic candidate in the Senate race. A July quarterly report from James’ campaign had yet to be posted on the FEC’s website as of Saturday morning. The deadline for filing the report by the FEC was Friday.

Additionally, the FEC sent a letter to James’ campaign committee treasurer, warning that failure to “timely file” a pre-primary report could result in an audit or civil monetary penalties. The letter was dated May.

The FEC website did not show a pre-primary report from James’s campaign committee on file Saturday morning.

“The campaign recognizes the importance of filing financial reports and is working diligently to file its Q2 report as well as the 12-day pre-primary report,” the James campaign said in a statement on Saturday.

His latest campaign filing showed his campaign with cash in hand of $14,191 at the end of March. The campaign reported raising $7,419 and spending $612 in the first three months of the year.

Commission filings can provide insight into a Congressional campaign’s financial operations and provide details about who funds a candidate’s campaign, as well as how the campaign spends money.

In the Senate race, Harrison’s Kenneth Cates is listed as the Libertarian Party candidate.

A nomination paper for Cates was not listed on the FEC website Saturday morning, and efforts to reach Cates for comment were unsuccessful.

“The latest filing from the FEC demonstrates the continued momentum of the campaign, as well as strong support for Congressman Hill’s work to represent Central Arkansans and their values ​​in Congress,” the campaign said. Hill in a statement.

As of Saturday morning, the FEC website did not have campaign finance figures covering June and part of May for Democratic candidate Quintessa Hathaway of Sherwood.

Emails seeking comment from Hathaway were not immediately returned on Saturday.

Libertarian Michael White of Little Rock is also a candidate for the 2nd congressional district.

A statement of candidacy for White was not listed on the FEC website Saturday morning. White, in a statement, said his campaign was not required to file a nomination paper at this time.

“My campaign has not yet raised or spent the $5,000.00 aggregate limit for campaign contributions or expenses,” he said in the statement.

U.S. Representative Steve Womack, a Republican from Rogers who is running for re-election in the 3rd congressional district, listed revenue of $168,962 and expenses of $88,402 from May 5 through the end of June for his campaign committee. . That left his campaign with $1,864,035.

His Democratic opponent, Lauren Mallett-Hays of Farmington, said he brought in $1,316 and spent $1,113 during the same period. That left his campaign with cash in hand of $947 as of June 30.

Libertarian Michael J. Kalagias of Rogers is also a candidate for the Congressional seat. As of Saturday morning, no nomination papers for Kalagias were posted on the FEC website. Efforts to reach him for comment were unsuccessful.

U.S. Representative Rick Crawford of Jonesboro, a Republican, is running for re-election in the state’s 1st Congressional District.

For that same period, Democratic State Rep. Monte Hodges of Blytheville, who is challenging Crawford for the seat, said he raised $2,390 and spent $9,134, leaving his campaign with $6,561 at the end of June.

The campaign of U.S. Representative Bruce Westerman, a Republican from Hot Springs representing the 4th congressional district, reported revenue of $222,734 and expenses of $279,760. His campaign had cash in hand of $1,464,856 at the end of last month.

Libertarian Gregory Maxwell of Dover and John White of Stephens, who is listed as a Democratic candidate, are also candidates for the 4th congressional district, according to the Arkansas Secretary of State’s website.

The FEC website did not show a statement of candidacy for Maxwell or John White on Saturday morning.

John White said he does not accept campaign donations.

When asked why a statement of candidacy for his campaign was not appearing on the FEC website, Maxwell said he would “fix it.”