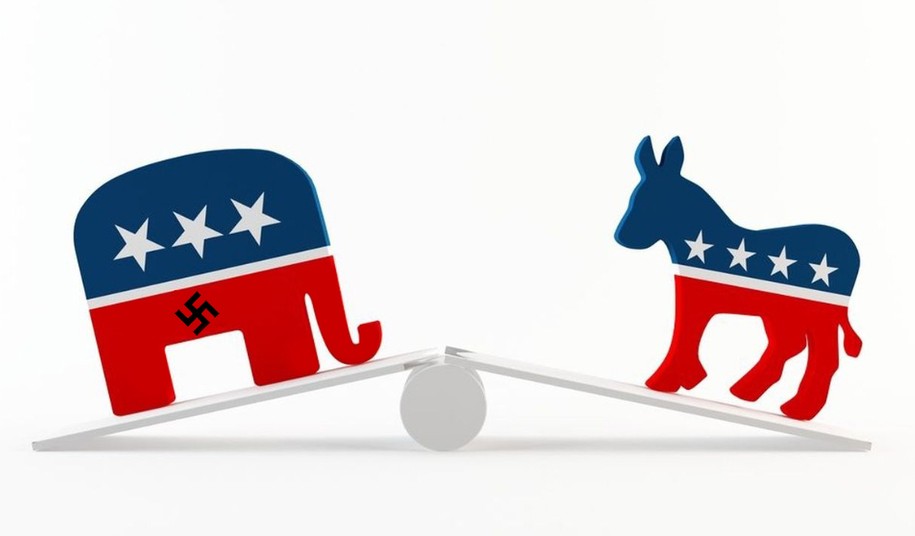 Trump, authoritarian and fascist forces have taken over the Republican Party, which is no secret to anyone with open political eyes or anyone here at KOS. America’s rather limiting two-party system has a gigantic flaw that has been punctured by a GOP tractor-trailer. It assumes that both parties are on the same page and have agreed to certain operating principles and follows certain policy lines and does not endorse crossing those lines. Their other unwritten agreement was that they both believed in a democratic form of capitalism.

National media neutrality is not neutral

None of these premises exist anymore, except in the minds of corporate media. This always gives equal time, more or less, to report what both parties are saying. Even if its corporatist nature seems to favor the Republican side of the economic arguments. And the Democratic side on some cultural issues.

Even corporate news not directly tied to the Republican right can be expected to maintain a so-called neutrality and report the statements of Republican fascists like Trump and other authoritarian spokespersons without judgment or comment. Also reactionary, terrorist or ridiculous. In this way, figures like Trump were able to play with the media like a fiddle and make fascist rhetoric appear as “normal”.

A prime recent example are Trump’s incoherent ramblings about calling a special election tied to allegedly concealed FBI charges relating to Hunter Biden’s alleged laptop. I almost expect we’ll soon hear more recycled anti-Hillary Bengazi rhetoric added to the fire. Republicans know that all the stale spaghetti stories they toss daily into the corporate media will be faithfully reported, no matter how false, baseless, or ridiculous. I have not come across a single article in the mainstream media that mentions how politically impossible and irrelevant this Hunter Biden story is.

The corporate media will also not ask Republicans hard but honest questions. Like when Senator Graham recently promised “riots in the streets” if Trump is indicted. I understand Graham’s reluctance to answer questions about his statements, but most media faithfully reported the statement without comment or opinion. Can you imagine the media comments if Biden promised Black Lives Matter riots in the streets if no police reform was passed?

The national media will never call a fascist a fascist

There has never been, and there never will be, any acknowledgment of the fascist aims and intentions of the Republican Congress or of Trump himself. This brings us to what the Democratic leadership needs to do and until recently they haven’t done enough. Which is to fight back and make a lot of political noise and force the media to cover their side of the big issues on a daily basis. Biden finally seems to have grasped the need for major messaging changes with his recent remark, which was actually a bit too kind, calling them “semi-fascist.”

Just as Republicans decided to bet on Trump, Democratic leaders must develop a different path to counter the move toward fascism. Significant financial support for the Republican Fascists can be traced to elements of the same capitalist system that the leadership had also tied itself to. This can only mislead the leadership’s ability to adopt forward-looking, progressive and class-based positions.

Indeed, the capitalist system is supported by the power and wealth of the federal government and the tax revenues of millions of average Americans. Obama may have saved the capitalist banking systems in 2008, but he did it by lending/advancing them billions of our own public dollars. Essentially, the federal government so hated by this same capitalist class is their ultimate insurer. If the Democratic Party wants to be a permanent and reliable opponent of fascism, it cannot hope to succeed without major reforms in the functioning of the capitalist system without responsibility or social conscience. The two-party system is dead and cannot and should not be resurrected. Just as Republicans sold their political soul to the MAGA monster they themselves helped create, the Democratic leadership must shift the party’s class priorities away from blind support on Wall Street and toward reform and a fairer distribution of wealth.

The wars to come

I would add one more factor to the equation. It’s that the Republicans have revealed their willingness to try anything towards achieving their goals. No matter how destructive or dangerous it may be and no matter how much it costs or how much damage it will cause to national interests.

This is especially true since the JD has the merchandise on Trump for his theft of national security documents. I expect a major distraction campaign of epic proportions to be launched in the coming weeks. How confident they can be that the corporate media will faithfully report every aspect of their attacks. I hope Biden and the leadership are expecting and preparing for this. And learned the importance of responding quickly to Republican rhetoric in the same news cycle. Something that Bill Clinton, whatever else you may think of his presidency, achieved and practiced. I also expect Putin to achieve something under the mid-term approach.

I call on the U.S. Ambassador to invoke sanctions against those linked to corrupt practices and violations of our democratic culture