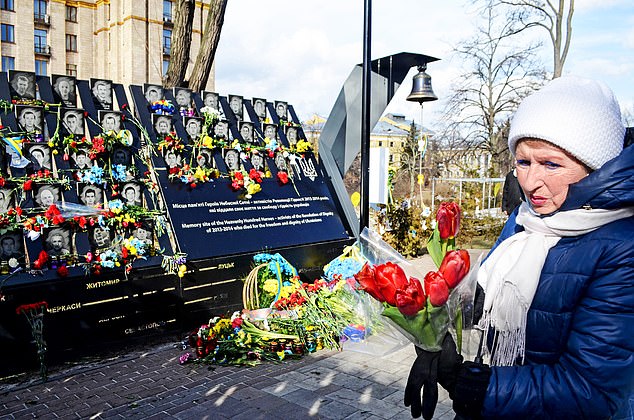 IAN BIRRELL: A day to honor those who died in pro-democracy protests in Ukraine

The sun shone as families walked down the street in Kiev, past trees adorned with paper angels and flowers dotting the ground. Children clutched red carnations and candles, placing them next to a series of austere portraits running along the wall.

They are the ‘Heavenly Hundred’ – pro-democracy protesters massacred here eight years ago in mysterious shootings before Russia’s illegal annexation of Crimea.

Galina, a 68-year-old pensioner, brought tulips past memorials to five men she had seen murdered in news footage

Galina, a 68-year-old pensioner, brought tulips past memorials to five men she had seen murdered in news reports, saying she came every year because ‘I felt like I was losing my own sons’ .

These brutal events – which I reported on in 2014 and recalled yesterday as I walked alongside those who came to mark the massacre – were the start of Moscow’s war on Ukraine which continues nowadays.

Ukrainian President Volodymyr Zelensky visited his wife Olena to lay flowers, saying the victims had given their lives “for the right to live in an independent state, in the family of European nations”.

His words were a sobering reminder of what is at stake in the struggle between democracy and dictatorship as Russian forces mass on Ukraine’s borders and Boris Johnson coldly warns that we could be on the brink of ” the biggest war in Europe since 1945″.

Western rhetoric on Ukraine can often sound incendiary. Yet yesterday’s commemorative events serve as a tragic warning of what brutal Russian President Vladimir Putin can do.

But even after five weeks in Ukraine, visiting 12 towns and frozen frontline trenches, I find it hard to see through the fog of this strange war, let alone discern what might be on the mind. spiteful of Putin regarding his menacing military machine.

Some things, however, are clear.

We know Russia invaded Ukraine eight years ago, resulting in a war that has claimed 14,000 lives – and is still directing events in the separatist Donbass ‘republics’ of Donetsk and Luhansk, including with military forces .

Britain, though still facing heavy criticism for its failure to tackle dirty Russian money, has become quite popular in Ukraine.

We also know that the Kremlin – which yesterday absurdly claimed that Russia has never attacked another nation – is repeatedly lying.

As a former KGB agent, Putin pioneered an Alice in Wonderland diplomatic approach in which he bends or subverts the truth so brazenly that it can be difficult to counter his enemies.

Putin has lied since the start of his presidency: about deadly apartment building bombings that boosted support for the war in Chechnya; on Moscow’s ties to the 2014 downing of a Malaysian airliner over eastern Ukraine; on the 2018 poisoning of former agent Sergei Skripal in Britain; on the hunt for political rivals such as the imprisoned Alexei Navalny.

Now we see the propaganda machine running at full speed again in Donbass with a blizzard of fake stories about assassination attempts, genocide, mass graves and even the supposed bombardment of sovereign Russian territory.

It is a nightmare to fight for Ukraine and its Western allies: Kiev is undermined both politically and economically.

Indeed, as Ukraine’s currency plummets due to market uncertainty, as Russian cyberattacks hit banks, as shipping is disrupted, as capital is withdrawn by foreign investors, as jobs are lost and energy prices skyrocketing, it is possible that a key part of Putin’s current strategy has been economic damage.

Talk of an invasion has had a disastrous impact, and it has an added benefit for the Kremlin: it corrodes support for Ukraine’s democratic leadership and its system of government. But that brings me to the third thing we do know: Politicians in Washington and London seem to have a clearer understanding of Putin’s approach and are responding to it by sharing intelligence widely and speaking in graphic terms about his intentions. possible.

It is a dangerous strategy. This allows Putin to portray the West as hysterical and risks cornering him after his unprecedented buildup of military force. Yet it also resulted in a largely unified NATO response. He reinforced support for Ukraine.

Talk of an invasion has had a disastrous impact, and it has an added benefit for the Kremlin: it corrodes support for Ukraine’s democratic leadership and its system of government.

Crucially, it has blunted Putin’s propaganda efforts that rely on spreading confusion and misinformation, while thwarting any Russian hopes of a sneak attack.

I’m certainly not a fan of Boris Johnson, but his government has played its hand well in tandem with President Joe Biden on this dispute and at least deserves credit on this front.

Britain, though still facing heavy criticism for its failure to tackle dirty Russian money, has become quite popular in Ukraine. Putin is waging a long Hybrid War, fought on many fronts and using weapons ranging from bullets and missiles to cyberattacks and disinformation.

A terrifying full military assault could be next. But it’s good to see the West trying to finally respond to Putin’s deception and trickery.