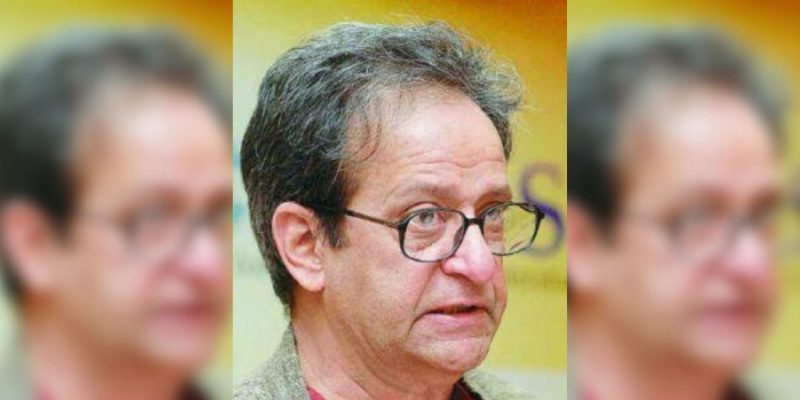 In memory of Aijaz Ahmed, a rebellious Marxist without pause

Our friend and comrade, Aijaz Ahmad, passed away a few days ago, on March 9. The passing of intellectuals often leaves a void in a world where we have received so much, so warmly and generously, from those we remember for their remarkable lifetime of service in politics and literature.

To lose it at this point, when the promised “new world order” finds itself in fragments with Blacks, Jews, Latinx, Asian Americans and Muslims marginalized like never before, is to face a scenario of hate crimes, unleashed ruthlessly in the wake of toxic election season. The overwhelming crises of racism, hunger and pestilence across the world demand immediate responses to the evils of oppression and poverty.

Supporting non-discriminatory and inclusive politics has always been Ahmad’s credo, albeit inherently provocative for the state.

I first met Ahmad in Oxford many years ago, where he delivered the annual Radhakrishnan Memorial Lecture, sponsored by All Souls College. I remember the week we spent in a remarkably free-spirited leftist environment where our conversations often became deeply heady and polemical.

Ahmed on the dilution of literary theory

Ahmad rose to fame when he questioned the accountability of literary theory, especially as taught in English departments around the world. In the 1990s, when his book, In theory, was published, most humanities students had been sucked into a whirlwind of nihilism with the introduction of French theory into English departments. Ahmad, fearless and unambiguous, condemned poststructuralism and, in particular, postcolonialism, for displacing the activism and political dissent that had been an important part of the academy in the 1960s and 1970s.

Ahmad himself was a product of this era which saw massive decolonization and the formation of nation states all over the world. He believed in identification with class, gender, history, resistance, political struggle and, above all, human liberation and praxis.

In his many essays, he blamed French philosophy for the destruction of activism by excessive textualism, and of Marxism by postmodernism. Ahmad was so provocative in his condemnation of the lack of commitment shown even by scholars like Edward Said and fellow Marxist Frederic Jameson, that he sparked the publication of a number of books as well as a full issue of the eminent journal, Public culturein response to the arguments set out in In theory.

He had, indeed, ruffled the feathers of many jet-set academics because he was not someone who cared about choosing his words carefully. He openly lifted star philosophers, naming them as he denounced their no-commitment policy of inactivity. Time and again, Ahmad argued that those who did not believe in absolute truth were not capable of being honest intellectuals with any degree of agency.

With that, Ahmad was also an acerbic critic of global capitalism, which leftist academics undoubtedly are, but with a difference. In his later writings, he began to believe that universities had become more like markets and trading centers; where the theories were sold to unsuspecting students who were then turned into free market consumers.

These theories (i.e., of course, postmodernism and poststructuralism) had a limited “lifespan” – just like global capitalism – and so contemporary education was complicit in global capitalism when it was about constant erasure, diversity and diffusion. This, for Ahmad, marked the total and complete collapse of causes, citizenship and identities, which were important for nations to maintain and for universities to promote in order to maintain the link between “theory” and the real life.

“Fashionable” philosophy was therefore an anathema that was promoted, all the more so by Third World scholars who had emigrated to the West. “Migration” and “exile” had entered the vocabulary of contemporary university teaching and research under a new guise; rather than being associated with trauma and grief, “hybridity” was the new buzzword destroying subjectivity and appropriating stability. It had become so fashionable to be “hybrid”; a “cultural amphibian” as Said said and as Ahmad lamented, “…we don’t live in three worlds but in one”.

Real grassroots people, Ahmad wrote, desired and yearned for stability while Western universities, as well as those aping them in India, advocated vagrancy and, sadly, created a great gap between lived reality and the milieu. university. He was one of those philosophers whose Marxist critiques would, in fact, help persecuted minorities who are denied citizenship or part of a great human exodus. These painful episodes in the lives of the poorest have nothing to do with the “marginalization” and “diasporic studies” taught today in universities.

Ahmad’s intention, apart from his Marxist analysis of globalization and capitalism, has always been to deliver the message of liberation from war, political persecution and oppression. The troubled and exciting times he lived through are evident in his tireless enthusiasm, which has a deep connection to dissent activism against the establishment; strive for all that is just and fair.

We met sometimes later in life and passionately disagreed, especially on inspiring topics like the meaning of war and strategy.. Referring to an unforgettable lecture by Professor Hew Strachan, Professor Chichele for the History of War on “The Meaning of Strategy: Historical Reflections”, Ahmad developed the idea that while strategy was a military term, the struggle for could freedom be a strategy? Strategy, for example during the Cold War, referred to peace as much as war and was often about realizing foreign policy intent rather than conforming to it. One of the reasons we are insecure about war is that we don’t know what the strategy is.

It is a significant objective in the struggle of the new left to enable grassroots movements to prepare against elitist forces of opposition, however vicious they may be in the hands of apologists for neoliberalism. Ahmad pleads for this “new politics” which is visibly being made in the Western world, despite the retrograde leadership in many countries.

To diverge a little, the work done on the profound transformation of the Labor Party in England into a meaningful social movement would serve as the impetus for socialist awakening in India, especially through the public intellectuals who castigated the backward conservative leadership by pointing to the efforts of the left to generate a correlation between the dynamic ingenuity of grassroots politics and the conditions necessary to shape truly democratic societies.

The task for the public intellectual would therefore be to examine and question the formulation of public policies, giving priority attention to their relevance to the masses as opposed to the scourge of neoliberalism and elitist forms of knowledge. Ahmad remained committed to scrutinizing official interpretations of politics, prioritizing “the whole way of life,” to use Raymond Williams’ phrase. Culture, belief and public opinion were not to be discarded by any political leadership. The “new policy” was therefore not simply a remonstrance; it was a sincere response to the design of a movement for a fair and impartial society that started at the bottom and progressed upwards.

On the limits of Marx

Ahmad was, at all times, aware of what Marx lacked and underscored it by drawing attention to some pressing social and cultural issues of our time. For example, despite his criticism of soil depletion due to capitalist agriculture, Marx did not point out the myriad ways in which capital defiles the earth. He believed that socialism would profit from the “progress” of capitalism; a vision overturned by the eco-disasters of our time.

Marx failed to censor colonialism enough and was unaware of the implications of racism; though, to be fair, he condemned it vehemently. On feminism, he writes almost nothing and takes household chores for granted.

Ahmad strove to address these shortcomings, always advocating for a new progressive movement, underpinned by a valuable resource for open and participatory socialism. A leading Marxist thinker, he espoused a tenacious drive to reinvent popular government that sought to address not only the pressing issues of feminist politics and ecological disaster, but also envisioned a civil society founded on the principle of egalitarianism. and a political system that supported views inconsistent with standard assumptions.

He had the ability to relate to the problem at hand through the critical practice of merging theoretical analysis with practical observation, always validating his conclusions with references to history and everyday life.

A man of personal kindness, he had strong opinions, but his gracious demeanor made those opinions hard to resist. He brought a vibe of candor to deeply fervent and engaging conversations, often embracing different points of view, thus perpetuating the belief in free thought. I remember the Greek poet Callimachus advising his contemporaries, and later Roman poets like Ovid, Catullus and Propertius, to stop aping Homer and instead practice “walking where chariots do not travel”. “Drive your tank not in the footsteps of others but on an unworn road,” he advised.

Ahmad’s progressive activism in a world turning fascist was, indeed, inspirational, especially to learn from the past as we confront the present and hopefully shape the future. While right-wing populists and left-wing purists self-righteously contravened the very notion of liberalism, Ahmad managed to enthusiastically defend the liberal tradition. For him, liberalism was a fundamental element of his very being.

Shelley Walia, professor emeritus, taught cultural theory at the University of the Punjab.