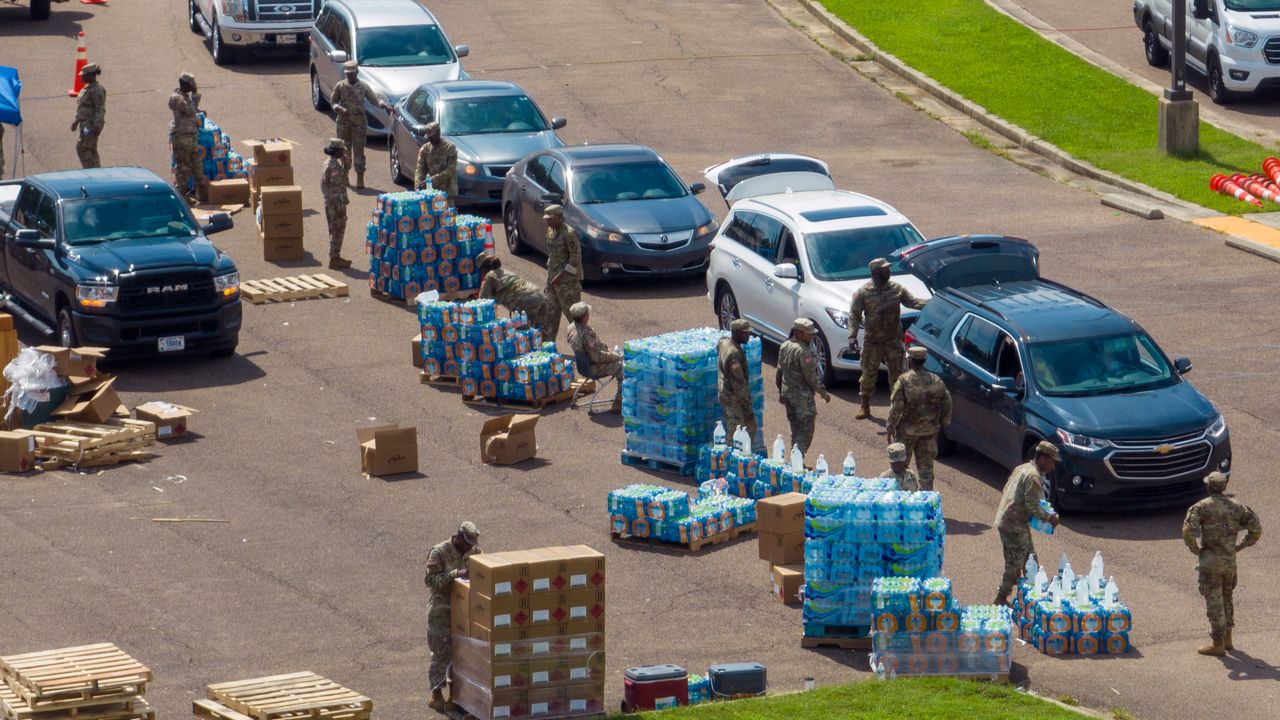 Jackson, the Mississippi water disaster is a crime of capitalism

The 150,000 residents of Jackson, Mississippi still have no access to clean water this week following the collapse of the water and sewer system under the pressure of heavy flooding late last month. .

While water service has returned to homes and businesses in the state capital, the city remains under a boil water advisory issued in July, with reports that the water remains dirty and undrinkable. Residents again lined up in long lines at distribution centers across the city on Tuesday, picking up bottled water to use for cooking and basic hygiene. About 600 National Guard soldiers were deployed to the city by Republican Gov. Tate Reeves to oversee the distribution.

As tens of thousands of people have been forced to rely on bottled water or use buckets to collect water from wells in the world’s wealthiest country, Jackson sits down and draws his water from the Ross Barnett Reservoir, the state’s largest source of drinking water. .

The current crisis in Jackson is part of a series of disasters across the United States, ranging from power outages in California to routine blackouts in the Detroit metro and poisoned water in Flint. In conditions where climate change is fueling extreme weather events and pandemics, systematic planning is needed to address the hazard. However, this challenge is met with indifference by capitalist governments.

Tens of billions of dollars have been poured into the war against Russia in Ukraine by the Biden administration in just a few months. Trillions of dollars have been spent on wars and military funding in the last two decades alone. And whenever Wall Street has run into trouble, from the financial crash of 2008 to the start of the COVID-19 pandemic in 2020, the government has leapt to doling out trillions in corporate bailouts and securing growing fortunes for the wealthy.

The current disaster in Jackson took years to prepare. It was preceded by systemic failures as the city’s public water infrastructure became the target of corporate looters and was subjected to criminal negligence by local, state and federal governments.

A $90 million deal was signed by an incumbent mayor with global conglomerate Siemens in 2012 to upgrade the city’s water and sewer infrastructure and introduce an automated billing system. New water billing and metering system failed to send bills to residents, resulting in more than $43 million in unpaid water bills and throwing the city’s water fund into crisis . A legal settlement in 2020 allowed the city to recover the $90 million from the company, but by this point the antiquated water system had deteriorated further.

In 2016 it was announced that high levels of lead had been found in water. The state continues to advise children under five and pregnant women not to drink unfiltered tap water. Lead in water is particularly harmful to children because it can cause serious developmental problems.

A 10-year, $109 million deal was signed with another giant, Veolia, in 2017 to operate and manage the city’s three wastewater treatment plants. Between December 2018 and May 2019, the company spilled four billion gallons of water into the Pearl River, violating the Clean Water Act and a consent decree the city signed with the federal government in 2012.

While Democratic Mayor Chokwe Antar Lumumba estimates it would cost about $1 billion to fix the city’s water system, the Biden administration has only allocated about $500 million over the next five years for statewide water infrastructure issues in recent legislation. Federal aid won’t do much to solve Jackson’s problems, nor will it help the poorest state in the country. An Environmental Protection Agency assessment in 2015 found the state needed $4.8 billion over 20 years to ensure safe drinking water, with much of the infrastructure reaching or well at beyond its expected life.

Under these conditions, where a dramatic underfunding at all levels has caused this disaster, large companies the wall street journal and Governor Reeves, with dollar signs in his eyes, proposed full privatization of the public water system as the solution to the problem, ending the plunder operation that began a decade ago.

A statement released by the LogMonday’s editorial board blamed the water crisis on “local government failure” and launched a proposal to place the city in state receivership. He drew the comparison to Flint and Detroit in Michigan, where emergency officials were involved in lucrative projects related to those cities’ water systems, which, in Flint’s case, helped create a disastrous trail. in the water crisis. Inspired by the LogReeves said at a press conference the same day that “privatization is on the table”.

At the local level, Democrats bear their share of the blame, having overseen the deindustrialization and systematic impoverishment of predominantly African-American urban areas like Jackson over the past four decades. The election of black mayors and councilors did nothing to prevent a dramatic decline in the standard of living of the working class.

The global social crisis is aggravated by the impact of climate change, which is generating increasingly violent weather phenomena around the world. Historic floods in Pakistan have already killed thousands and displaced more than 100,000 people. China is suffering from a massive heat wave. Recent studies by scientists have warned that even with immediate action, climate change will raise sea levels by almost a foot, while rising temperatures will devastate the lives of millions of people in the Middle East and in Africa.

Capitalism has no solution to any of these problems. The subordination of all social and economic life to private profit blocks a rational response to crises like the one in Jackson, Mississippi, while preventing the coordinated global planning needed to address their underlying causes.

The only solution lies in the expropriation of the rich and the big banks to free up trillions of dollars which must be invested in the reconstruction and development of the country’s infrastructure and the fight against climate change through coordinated emergency measures at the global level. global scale. This will only be possible through the socialist reorganization of society by the working class to meet human needs and not for private profit.