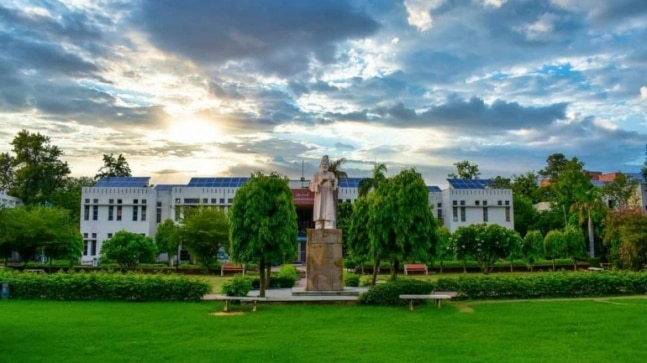 The Department of English, Jamia Millia Islamia (JMI), organized the twenty-first lecture in the distinguished lecture series, “Surveillance Capitalism Meets the Pandemic: Surveillance Challenges for the ‘Social Contract'” by the Professor David Lyon, Professor Emeritus in the Department of Sociology and Faculty of Law at Queen’s University, Ontario, Canada and the former Director of the Center for Surveillance Studies, Friday, April 22, 2022.

Supported by the Scheme for Promotion of Academic and Research Collaboration (SPARC), Ministry of Education, Government of India, the conference was organized as part of the ongoing academic collaboration with the Department of English and American Studies, University of Wurzburg , Germany, and succeed in being part of a series of successively relevant conferences.

The lecture was conducted by Zahra Rizvi, Shraddha A. Singh, Suman Bhagchandani and Aparna Pathak, Ph.D. scholars, Department of English, JMI, and was enthusiastically attended by a large crowd of scholars, students and teachers from around the world and various time zones.

Prof. Simi Malhotra, HoD, Department of English, JMI, Indian PI delivered the welcome address, greeting the guest speaker, faculty, scholars and students. She then introduced the esteemed speaker, Professor David Lyon, who was greeted with a round of applause.

In his lecture, Professor David focused on the idea of ​​surveillance capitalism which allows data consumers to voluntarily share data with private and government bodies, allowing them to negotiate the boundaries of privacy. Professor Lyon used the argument in light of the contemporary pandemic situation, introducing the term “vaccination passports” as one of the legit practices for use by doctors, travel controllers and, of course, the government, thus giving them an agency to acquire data about people.

This vast production of medical data, according to his study, creates an opportunity for racial discrimination that goes beyond surveillance from an individual level to that of a community.

Professor Lyon’s presentation also traced the history of surveillance, beginning with references to the work of Hobbes and Locke, followed by industrialization and capitalism which changed its meaning, use and applicability.

This was suggested by another example of platforms such as Google Maps, Amazon, Examity and Zoom, which digitally track movements, choices and examination of private spaces. It is in the current context that Professor Lyon raised the need for data democracy which can be achieved by practicing a sensitive approach towards

2. The state and its people

Comparison of Bread Financial (BFH) and the competition

5 proven tips for being more productive, according to a neuroscientist