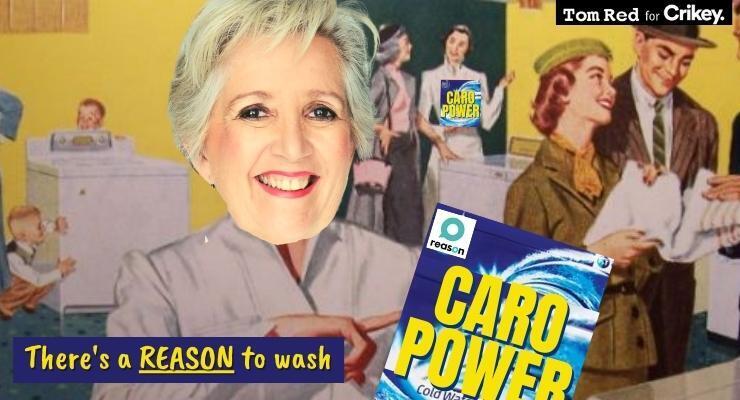 “The most famous advertisement I wrote,” says Jane Caro, as we walk down Park Street towards Hyde Park, “was for washing powder.” She grimaces. “Where this guy is in a nightclub and asks a woman for her phone number and she…”

“She writes it in lipstick on her shirt and then…” I said excitedly, suddenly remembering, clear as dazzling whites.

“Yes! Me and the art director put this together. Very proud of that.

In the ad, if I remember correctly, the young man, staggering home, drops the shirt in a basket, and in the morning wakes up in reverie… then horror when he hears the machine working. Too late! The power of whatever goop erased its price. It was very 90s, high-end finish, gleaming Anglo couple, the slight naivety of 90s style, fantasy from another time.

“It opened a lot of doors.”

“I could have sworn some guy wrote that.”

“No, it was us. It was designed to try and get guys to buy more washing powder.

It occurs to me that this may or may not have worked. It’s a castration scenario, of course: the woman, smiling, brandishes the lipstick phallus to give the guy a false contact, which erases the trace of a trace anyway. She got his number, but he never got his. In the interest of an interview, I decide not to talk about it.

Right now, hundreds of protesters in red T-shirts are beginning to swarm around us, part of the state’s high school teacher strike. We are also on the way. Caro, who is no more than five feet tall, wears a brown RM Williamsy jacket and tan bush hat, half a dozen of her supporters milling around her, wearing teal and white Reason t-shirts, huddle and regroup as they hand out a few fliers—“Don’t Overdo It”—for Caro’s senatorial campaign, as part of said Reason Party.

She has an imposing style; it must also be said that she has a vague look of Paddington Bear, as if this Peruvian donkey had suddenly become militant and had joined the Shining Path (Paddingto e la Senderosa Luminosa hasta la victoria siempre).

“Well, anyway, it was advertising, which I had stumbled into and stayed with for decades, the editorial staff. We were a group of women in advertising. We supported each other They would have needed it in Australian advertising in the 80s and 90s, when big beasts like Singo and co stalked the earth – bloody Singo, get a beer, get 60, wehredya get it? Let’s put the “lunch” on the company account. Are you with me!

Between then and now, Caro, well, you knew her…she’s been everywhere, done everything. Twenty years ago, frustrated by the continuing inequity in the distribution of public and private school funding, she wrote an op-ed about it for the SMH out of the blue to champion the beleaguered notion of a truly fully funded system geared towards reducing inequality of opportunity, and has not looked back. Since then, a torrent of articles, documentaries, public speaking, spreading from education, to the environment, to violence against women, and beyond.

So when it was announced that Caro was running for the Senate in this election, no one was surprised that she joined the fray. When it was on the Reason ticket, there were more than a few raised eyebrows. Much of the reason has been the vehicle of Fiona Patten, formerly head of the Sex Party, the closest and most successful thing Australia has had to true libertarian attire. Patten is the former head of the Eros Foundation, which was either a bold champion of liberation or the peak body for some dodgy brothels, with their own expertise on the oppression of women, or a bit of both, depending on your policy.

But as bohemian politics have shifted, Patten’s politics have shifted toward a blend of old libertarianism — championing voluntary assisted dying, for example — while pushing what she once would have called the nanny statism, establishing, for example, a ‘ministry against loneliness’ state. put in place a system of real accountability; relaunch the public sector in health, education and the rest. They put more emphasis on consultation, democratization and political details than the Greens, the former Sexo having become a German-style ordoliberal leftist group.

So the big question for someone like Caro is, why Reason? As a progressive, why not join and build the Greens?

“Because they didn’t ask me anything. And Reason did. She says this without resentment or arrogance, although not a whiff of it escapes the idea that a part is joining you, rather than the other way around.

Now we were in Hyde Park, an absolute sea of ​​red T-shirts, some rainbows, some motley other specific school colors (“Hyde Macquarie Fighting Bolshevik Brigade”). There was a rocking sound system and hardcore chants over and over. “When I say teachers, you say power. TEACHERS!” “POWER!” “NO TEACHERS, NO FUTURE,” the chant continued, even though this one could have been written with 11th grade approval.

“Also, when it comes to Reason and the Greens, I liked the idea of ​​a smaller, evidence-based party.”

“Well, as opposed to a party based on consensus.”

Many Greens would be pleasantly surprised to learn that the Greens Bone-Crushing Machine is consensus-based, but let that pass.

“But there always has to be a political decision at the end. Science does not enact itself…”

“Yes, but -” Jane intervenes, before someone, a cheerful young woman bustles about. “Oh Jane, I just had to say, you are an absolute inspiration to me. You explain things so clearly…”

I give them some privacy and talk to a few Caro supporters. In fact, more than a couple of Team Caro here are very Caro’s team, relatives and personal friends of the candidate, a growing trend among these small parties and independent candidates. Suburban warlords with an army of t-shirts, spreading over the green hills.

Jane finishes. “And together we can get the job done!”

She gave a kind of buzz to the young woman, who goes off a little floating. It’s probably the Caro effect. There’s a touch of Vegemites there, love it or hate it. For many, Caro is the embodiment of progressiveness, and positivity, the feeling of liberation that comes out of the 1970s, of fulfilling a destiny. She is a little household god for many of this generation. For some who will come later, she represents baby boomer cheerfulness, a worldview based on affordable housing, a time when the atmosphere wasn’t trying to kill you, the personification of a generation that didn’t don’t understand how it is now.

To be evidence-based, much of this is simply ex-Honi Let, post-libertarian, Marxist, Twitter burnout, which is about 40% of Sydney Twitter, but they can talk about it. Some have colluded on Caro’s latest project, a novel titled The mother, about a mother’s heroic attempt to save her daughter from violent coercive control, and who… well, Jane isn’t Diane Demetre, who allegedly had the daughter saved by a sheikh landing his helicopter in the backyard and taking the girl to found a dynasty in the gleaming sands of the desert – and could do with it. (I’m on my third Demetre, Punishment, about a sniper who falls in love with the woman he is supposed to assassinate. More please, but my God, the number of these new candidates with books. This election has a reading list like a 19th century novel course.)

The baby boomer thing is also unfair, of course, because much of Caro’s long war on the education front has been about eroding a commitment to reducing inequality that we’ve been pursuing for some decades. , until this happens. “If I had joined the Greens, the benefit for them would have been someone advocating for public education among a lot of people sending their children to private schools,” she says. But she also mentions that her husband – darling of the college – as a drinks merchant, introduced Veuve Clicquot to Australia, and if she is victorious, they will thus raise a toast to her triumph. Baby boomers. Nothing like this before, nothing since. “We have John Bell doing a TV commercial for us.”

“Look, the bottom line is that the Greens have no chance of winning a second Senate seat, so without us it would have just gone right. Indeed, Reason is a place where blue voters in the lower house can vote for the Senate. You can’t really argue with that. The Greens aren’t complaining and, to be honest, you never really know what’s going on behind the scenes.

The protest, not an action but a good old fashioned mass protest, swells to fill the park before marching on Parliament, and Team Caro dives into the Sea of ​​Red, a small turquoise wave. The Greens haven’t arrived yet, but when they do, it’s amazing, about 25 of them, all in green with a green flag on a long staff. Perched on a slight rise in Hyde Park, they watch the small party formations like the Savoy cavalry watching the unfortunate Piedmontese, about to dismantle them.

The Caro team has been engulfed in the sea of ​​red, but the last thing I hear is from the podium: “I SAY TEACHERS YOU SAY POWER. I SAY – OH, I JUST HAVE TO TAKE A FAN PICTURE WITH JANE CARO. SHE IS HERE, SHE DOES THE WORK!”

She is doing it. Will she do it on May 21? I’m still partisan enough to believe that the left should build the Greens, or other leftist parties, but as I said, you can’t deny the perverse logic our system demands: unity in difference . In the end, it’s all in the numbers.