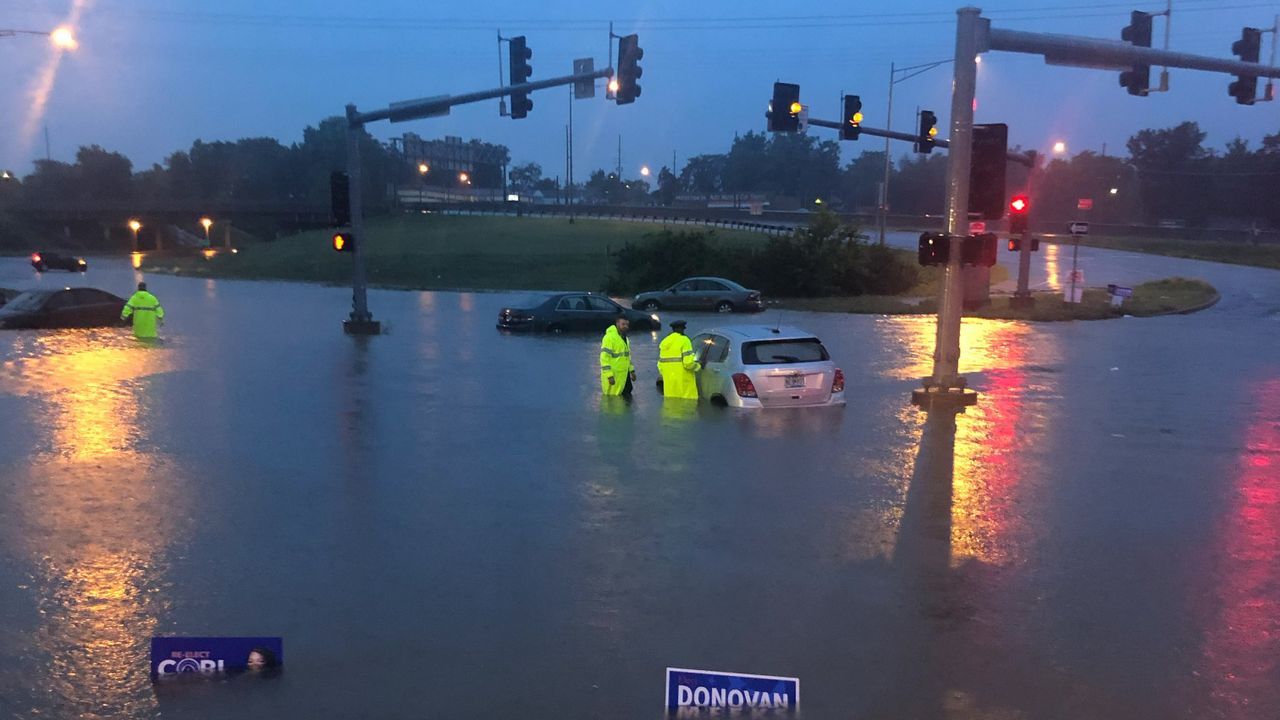 Massive flooding in St. Louis, Missouri leaves one dead and 20,000 without power

Early Tuesday morning, the city of St. Louis, Missouri issued a severe flash flood warning to its residents in response to a record torrential downpour. The previous record for most precipitation in a single day in the city, just over six inches, dates back to 1915 when the city was hit by the residual effects of the Galveston hurricane that killed more than 400 people. It took 24 hours for rainfall to reach this record. This week, it took less than six hours for St. Louis to break that record.

The National Weather Service reported several alarming facts about Tuesday’s downpour. First, daily rainfall totals reached 9.04 inches, the highest on record (although some stations reported the number closer to 10 inches). Second, 7.68 inches fell in the first six hours, a development that has less than a 1 in 1,000 chance of occurring in any given year. The storm also accounts for about 25% of the city’s average annual precipitation total. Finally, the normal rainfall amount for July and August combined averages 7.31 inches, again broken into a single 24-hour period.

There was one reported death – an unidentified man in his 60s was found drowned in his submerged car. Meanwhile, more than 400 people needed relief on Tuesday due to massive flooding. Some were reportedly forced to swim through the windows of their own homes to avoid death.

The floods happened with extraordinary speed. In one example, Dardenne Creek in the St. Louis suburb of St. Peters rose more than 21 feet in just over seven hours Tuesday morning. The creek is usually only one to two feet deep.

The effects on the city’s infrastructure were nothing short of apocalyptic. Flooding submerged portions of Interstate 70 – a major artery for morning commuters – forcing the freeway to close in both directions. Interstates I-64, I-270 and US Route 61 also reported closures.

About 18 households required assistance from the St. Louis Fire Department due to occupants trapped in their homes by rising water. Power outages eclipsed 20,000 on Tuesday morning before being partially restored later in the day.

Extensive damage was also reported to many of the city’s electrical substations and equipment. A pedestrian bridge has reportedly collapsed due to erosion caused by heavy rains near Saint Charles, Missouri.

The threat of more destruction and even death from this climate pattern is not over. According to AccuWeather, meteorologists are predicting more intense rainfall and flash flood danger in Missouri, as well as Kansas and Virginia for the rest of the week. Tuesday also marked the first-ever flash flood emergency in the city of St. Louis as Lieutenant Governor Mike Kehoe declared a state of emergency for the state of Missouri. The weather situation remains unstable as well as the condition of the dozens of evacuees forced to leave their homes and in need of shelter.

The powerful storm in St. Louis is not an isolated event. The effects of climate change are being felt around the world and on a deadly scale. Europe recently experienced record heat waves that forced bus drivers to work in temperatures approaching 50 degrees Celsius (122 degrees Fahrenheit) while dozens of families were forced to evacuate their homes. The South and Southwest of the United States are also experiencing a massive heat wave that is putting the lives of workers and families at risk.

As the WSWS reported on Monday, a shocking video showed a UPS driver delivering a package in Phoenix, Arizona, as he collapsed from heat exhaustion. Wildfires have engulfed areas near Yosemite National Park like more than 5.5. million acres in the United States have been burned by wildfires this year alone. In winter 2021, Texas and northern Mexico experienced record temperatures, including a snowstorm that killed dozens of people. Many homes were without power for days as the Texas state power grid suffered a catastrophic collapse due to lack of infrastructure maintenance.

The response of capitalist leaders around the world to the enormous consequences of extreme weather fueled by man-made climate change has been to ignore it. In the United States, President Joe Biden and Congress have passed and proposed budgets of tens of billions of dollars in funding for the most backward initiatives. Biden’s military budget passed by the House is a record $840 billion. The proposed House budget for police funding is $37 billion. The official tally of US-backed funding for Ukraine’s war against Russia is $40 billion. Biden’s climate change plan meanwhile has a budget of $2.3 billion.

The capitalist class, and the elected officials who represent its interests in Congress, have established priorities that involve the sacrifice of millions for the enrichment of a tiny minority. Funding the military, endless and reckless wars and a militarized police force show beyond any doubt that the priority of the ruling class is to defend its wealth at all costs, regardless of the number of workers and families who will get sick or die. The COVID-19 outbreak represents this impulse most glaringly with the bipartisan “let it rip” strategy, which has claimed more than a million lives in the United States.

It is abundantly clear that the capitalist system cannot and will not protect the lives of billions of people against anything that could jeopardize the profits of the billionaire class or slow down military operations. Only the overthrow of capitalism as a whole internationally and its replacement with socialism can address climate change by bringing the world’s resources under the democratic control of the working class.

The Dems lead ANYBODY in two congressional races. Why?