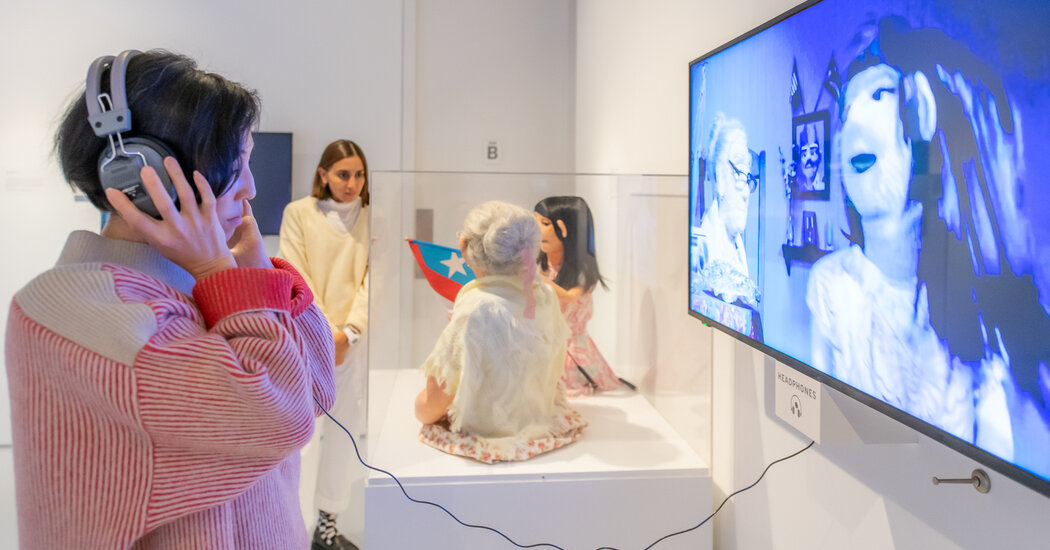 When his autistic son, Nate, was growing up, Josh Sapan used to take him to the Museum of the Moving Image in Queens where video game exhibits helped Nate connect to the world.

These experiences inspired Sapan, a museum administrator, to help establish a program that would not only recognize the important role moving images can play in the lives of people with autism, but also highlight the people on the spectrum who create these images. pictures.

“I was just thinking, wouldn’t it be wonderful if there was some recognition for the work done by people with autism?” said Sapan, executive vice president of AMC Networks. “In its elevation, it could also boost funding, education and awareness.”

The result is media marvelsan exhibition, awards ceremony and festival that opens on March 31 and celebrates media makers on the autism spectrum.

“We highlight something that already exists and then help amplify it,” said Carl Goodman, the museum’s executive director. “Innovation in the creative arts often comes from those who bring something cognitively unique.

He added that the museum seeks to recognize “how those who don’t necessarily fit cultural norms can end up playing a role in some of the most culturally significant works of art of our time.”

Dena L. Gassner, member of the Autism Interagency Coordinating Committee with the Department of Health and Human Services, served on the museum’s advisory committee. She said some people on the spectrum react to the rhythmic nature of moving images, especially ones they may watch over and over again. “They like familiarity and predictability; there is a pattern to that,” said Gassner, who is on the spectrum, just like his son.

Selected pieces range from DIY projects to those created with large production budgets.

“The message behind the show is self-defense,” said Sara Guerrero-Mostafa, the museum’s assistant director of education and community engagement, who organized the effort along with two other staff members – Miranda Lee and Tiffany Joy Butler – with Sapan and an advisory board of lawyers, experts and artists.

“It’s part of saying, ‘Please accept as good people who act differently, who might say things in a different way, who might not look you in the eye,'” Guerrero-Mostafa said. “The message is that there is no one way to be autistic and we want to speak for ourselves. We don’t want to be told to conform.

“It’s that person’s journey of whether or not to reconcile the two halves of themselves,” Tucker-Meyer said in an interview. “I personally have the privilege of coming off as neurotypical in certain situations, and that has its own advantages and its own problems. I was able to move in circles that might have been closed to me, but at the same time, it can contribute to feelings of alienation or exhaustion, which is what I struggled with in this film.

Among the 18 works presented at the exhibition are those of Bradley Hennessey An aspy life, an arcade-style video game that deals with “scripting,” the strategies used in autism education to help people know what to do in different social situations. “Having an exhibit is going to shed more light on our experiences,” Hennessey said.

The 2021 film “The Father of Rodents” by Bryn Chainey, depicts wrestlers from Australia to the United States. Alba Enid García Rivas and Julio Garay, a wife and husband team from Puerto Rico (Garay and their daughter have autism) created puppets and an animated film about a grandmother teaching her granddaughter about their Taíno ethnic group: “Dak’ Toká Taíno/Yo Soy Taíno/I Am Taíno”.

The exhibition also features the 2007 short film “In my language” by blogger Mel Baggs, who died in 2020. The film, which offers a window into the minds of people who think and communicate in non-traditional ways, received widespread coverage thanks to CNN coverage when it was first released on YouTube.

London-based artist April Lin created a giant mural of moving images that was commissioned for the museum’s lobby wall. “Cinema is my way of communicating,” Lin said. “The specific contributions of people with autism are often overlooked or not given the chance to flourish. This exhibition is a chance for us to be seen on our terms, without having to make ourselves smaller or water down the things to fit someone else’s vision.

Submissions were reviewed by a panel of experts that included Sapan; actors Joe Pantoliano and Tony Goldwyn; Cheryl Henson, President of the Jim Henson Foundation; and producer Brian Grazer.

The festival includes a workshop on the creation of access riders for artists with disabilities, an animation workshop and film screenings.

Ultimately, Sapan said, he hopes Marvels of Media will become something akin to Special Olympics, paying more attention to the art forms that meant so much to his son and others who share his interests. “It’s a personal project,” Sapan said.