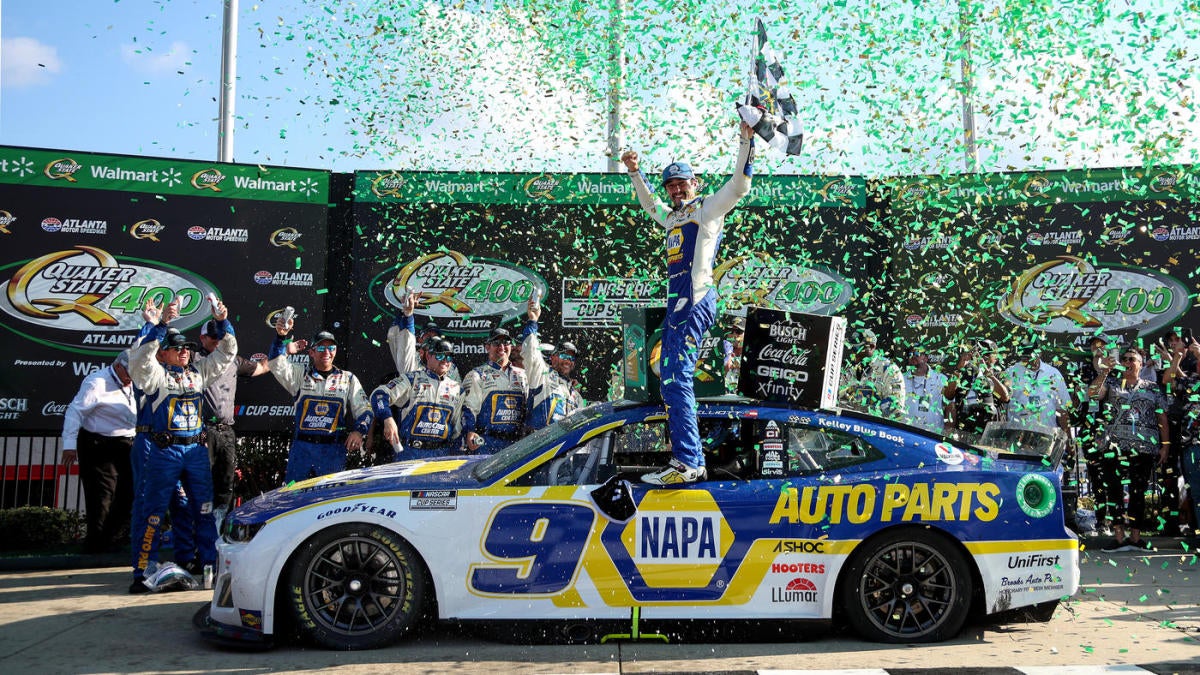 It’s been almost 30 years since the last time racing fans at Atlanta Motor Speedway saw a Georgia-born driver — especially one from a certain Dawsonville racing family — take the checkered flag. In another dramatic run from Atlanta that kept everyone guessing until the very end, the checkered flag finally flew for another Georgia favorite.

After taking the lead with two laps to go in a frantic finish, Chase Elliott won the Quaker State 400 by throwing a block over Corey LaJoie to claim his third victory of the 2022 season and his first ever at Atlanta Motor Speedway. Elliott’s victory is the first for a Georgia-born driver at Atlanta Motor Speedway since Chase’s father, Bill Elliott, won the final race of the 1992 season.

After five different drivers won two races each this season, Elliott’s three wins are now the best of any driver this year, bringing him even closer to the regular season championship and top of the playoff standings. .

As one would expect, Chase Elliott’s win was hugely popular with the Atlanta crowd, who made their approval clear as Elliott celebrated on the front stretch after making an aggressive move to protect his advances into Turn 1 on the last lap.

“Obviously I knew he was going to have a big run,” Elliott told NBC Sports. “I didn’t really want to give him the bottom, and I tried to give him a real, good, aggressive block. I felt like I had enough room to give him a second, and he was just there on the right side of my rear bumper, so it was far enough from the back of the bumper to propel me forward.

“I hate that it destroyed cars, but I don’t know what you’re doing. You either live the win or you don’t. I’m going to choose option A every day of the week.”

Here are more results from an eventful 400 miles:

To date, Corey LaJoie has built his credibility as a Cup Series driver largely through his work as a podcaster, as his Spire Motorsports team doesn’t have the funding or resources to compete week in and week out. The drafting tracks are LaJoie’s opportunity to fight, and after finishing fifth in the spring, his career-best finish, he made it clear what approach he was taking in Atlanta.

“If it’s a superspeedway, we need to push and be able to throw a Hail Mary and steal one,” LaJoie said. during a media conference call on Tuesday.

What happened on Sunday was a last 50 lap fever dream for LaJoie: He raced in the top five throughout the final laps of the race, leading multiple times for a total of 19 laps and getting into position to win with a great launch on a restart with eight laps to go. LaJoie was the leader for the final restart with three laps to go, lost the lead to Elliott with two to go, but got to work setting up the winning move entering Turn 1 on the final lap .

Backing up to run over Elliott, LaJoie took his shot looking outside of Elliott. But Elliott managed to throw the block on LaJoie, and LaJoie found himself in the outside wall before turning inside and taking Kurt Busch with him, finishing 21st and turning what could have been one of most shocking upsets in recent NASCAR history. in one of the biggest heartbreakers instead.

“It was nice to have this thing in the air for once,” LaJoie told NBC Sports. “I made my move and it didn’t work. He made a good block, and the siren was ringing in Dawsonville unfortunately… I wish car #7 was in Victory Lane. But if we keep running like this more constantly, that time will come.”

Ross Chastain Against The World

After a second-place finish, the BearBond across the front of Ross Chastain’s car pretty much told the story of his day: Chastain’s bumper was used, crashes followed, as did many angry drivers against Ross Chastain.

First, Chastain got into the back of Martin Truex Jr. and spun him into the middle of the pack, unleashing a nine-car pile-up that sent Austin Dillon hard into the wall and left him furious at about Chastain’s conduct. Later, Aric Almirola was so angered by Chastain’s conduct that he angrily remarked “he better hope I don’t see him at Food Lion” during the week.

Then, late in the race, Chastain lost his nose in turns 3 and 4 but stayed on the throttle, entering Denny Hamlin’s left-back quarter panel, spinning Hamlin and renewing the anger that Chastain had incurred at Gateway last month.

Although Hamlin didn’t demand revenge on Chastain – he was picked up in another crash shortly after and didn’t stand a chance – he did utter more words of warning after the race.

“Everyone has their different levels of tolerance, definitely…I’ve peaked,” Hamlin told reporters after the race. “Everything works out in the end.”

Explaining his end to the crash with Hamlin, Chastain said he had overestimated how fast he could go mid-corner with the damage to his car before he lost his nose, and would try to explain that to Hamlin.

“You all know I’d take full responsibility if I met him. But I had so much damage, I was so much tighter,” Chastain told reporters. “We had done a lot to free the car, but it was just too tight and I just couldn’t press the accelerator like I could earlier.

“I still brought up a few, but it wasn’t enough. I’m not putting this one next to the other incidents.”

The NASCAR Cup Series is winding down a bit next week as it heads northeast and the New Hampshire Motor Speedway’s Magic Mile for the Ambetter 301 next Sunday at 3 p.m. ET.