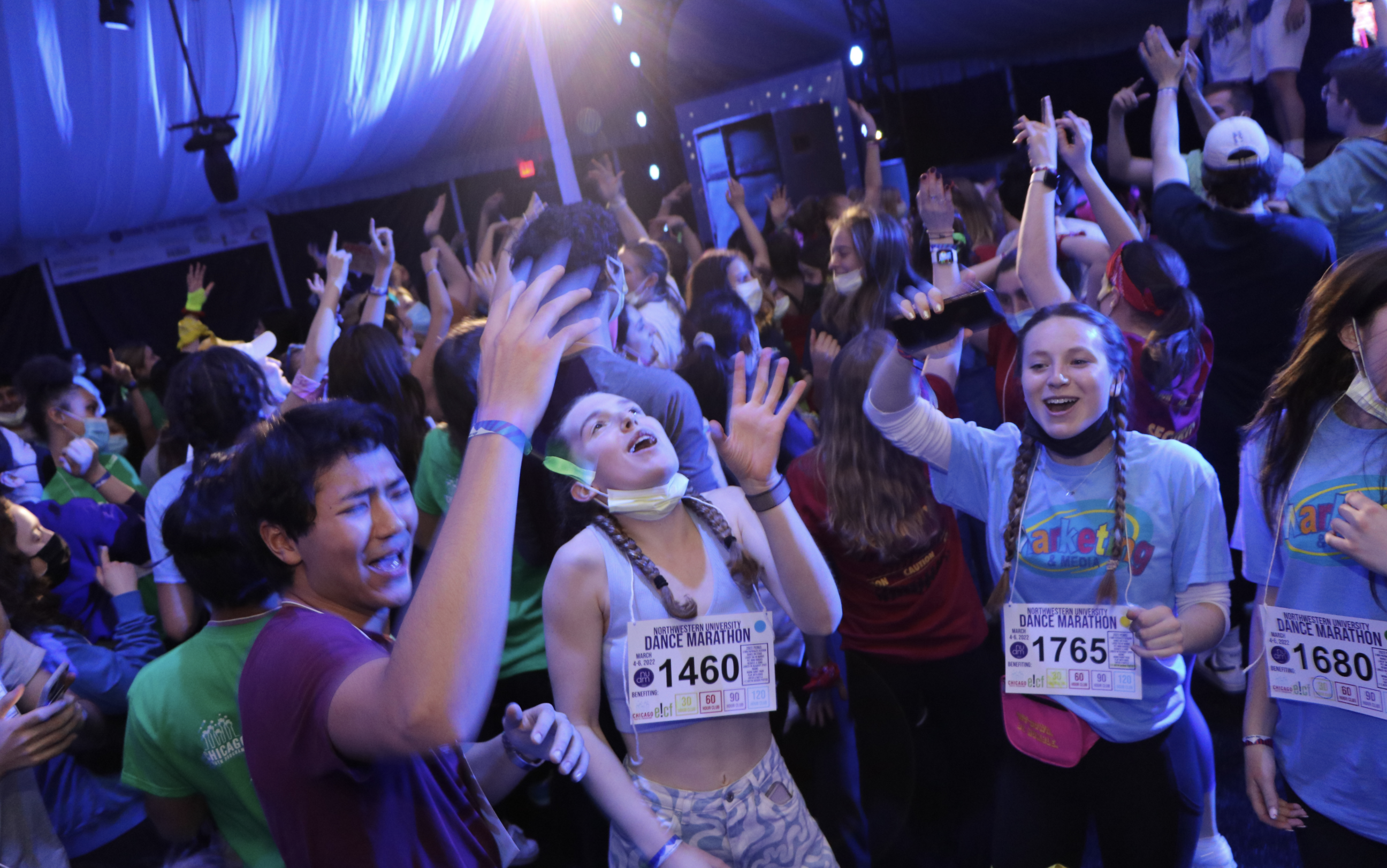 The 48th Annual Northwestern University (NUDM) Dance Marathon took place this weekend. The annual fundraiser, affectionately referred to as “DM” by the Dance Marathon team, is a well-known charity event throughout North West Campus and its large alumni community. Even the bad weather late Saturday night did not detract from the success of the event.

After the 30-hour event closed, NUDM leaders announced impressive results: $580,778 raised through 4,680 one-time donations, several thousand snacks and gallons of water consumed, nearly 1,000 students deprived sleepy but in good aerobic shape and too many meetings and meeting times. count, but each was for a good cause.

The excitement leading up to the 7 p.m. departure was palpable. The rhythm of the music was felt in the parking lot, the lights shone around and inside the tent and the students were busy taking care of last minute details. Members of the DM team wore brightly colored t-shirts to identify specific responsibilities, the smell of cold air outside contrasted with the musky warmth of the tent and Gatorade, water and unlimited snacks and meals suggested refreshment to come. There was relief and joy at finally – after two years of a virtual marathon where students danced alone in dormitories – being allowed to dance with other people. The students applauded.

The tent tingled. And then it started. DJ Ron played music throughout the 30 hour event. Cady and Dan, Executive Co-Chairs, welcomed the crowd and introduced the representatives of the two recipient organizations. One is Chicago Youth Programs (CYP), which strives “to improve the life opportunities and health of young people in low-income neighborhoods, primarily in Chicago’s south and west neighborhoods, through long-term academic, emotional, and mental support ,” according to its website. Melody Brooks, CYP’s External Engagement and Events Manager, took the stage to acknowledge DM’s generosity and thank the dancers.

Brooks said she completed the application twice before being accepted the third time. CYP will use DM donations to strengthen existing mental health resources for families, geographically expand the organization’s work, and strengthen their scholarship endowment.

the Evanston Community Foundation (ECF) was a named secondary beneficiary for the 25th consecutive year. ECF President and CEO Sol Anderson took the stage to thank the DM community and wish the dancers well. The ECF will apply this year’s DM funds to the ECF Now! Fund, the “unrestricted annual fund that supports operations and grantmaking,” according to Anderson.

Next, emcees Shira Hirsch and George Javitch came out to the applause, ready “to keep the dancing population excited all year and 30 hours!” Taking the stage is the culmination of a year of skits, fun costumes, quiz contests and other activities designed to engage dancers and keep them dancing for 30 hours straight!

They reminded dancers of the rules: masks must remain, dancers must be escorted to the restroom by someone from the security team, and there is no early departure without an approved “early leave” form. They pointed to the three clearly marked emergency exits and began to dance as the crowd followed.

The visible dedication and leadership of Hirsch and Javitch mirrored the commitment and work ethic of the other committee co-chairs. The Deputy Minister’s website identifies 11 committees plus the two executive co-chairs. Each committee is staffed with 10 to 20 student volunteers who work throughout the year to fulfill the obligations of their committee. The Executive Committee has 21 members.

Brent Turner, executive director of Campus Life, said he began meeting with the executive co-chairs weekly a year before the actual marathon. The executive co-presidents represent the 150 students who work on the production of DM, in addition to the 900 registered dancers. Turner’s colleague, Tracey Gibson-Jackson, Director of Student Organizations and Activities, also works closely with DM teams throughout the year and is on hand throughout the marathon.

The intense planning around DM is the result of years of refinement. There is a 48 second time-lapse video tent and dance floor being built by Northwestern’s capable field crew. Teams of students set up lights around and above the dance floor, the livestream connection and screen, and speakers for the music. There is a stage up front for the emcees and a raised platform aft for the DJ and crew. A table on one side contains numbered spaces for students to leave their water bottles when they go out to use the bathroom. A snack kiosk holds the courtyard on the north side of the tent. Students with experience as paramedics are on duty in the back, as is an ambulance outside the tent.

More than one person ERT spoke to described DM as “a well-oiled machine.” DM is divided into 10 three-hour blocks. Each block is programmed with specific music, musical performances by students, announcements and snacks. Nothing is left to chance. Donations are pouring in from local restaurants and supermarkets to hydrate and feed the dancers. In addition to snacks throughout the marathon, dancers receive three full meals on Saturday before the final at 1 a.m. on Sunday.

After 8 p.m., about 50 seniors in the tent were wearing purple t-shirts that read “120 HOURS LATER,” identifying them as NUDM volunteers during the four years at Northwestern. This coveted designation demonstrates their commitment to Northwestern and charitable fundraising, and these seniors are honored in the spring with a dinner at the home of Northwestern President Morty Shapiro. Shapiro stopped around 5 p.m. to cheer on the dancers, it was his last NUDM as university president.

This year, the DM team had to deal with several new factors. DM began as a fundraiser organized around Greek life on campus, but currently Greek life is trending down on campus and at least three sororities have disbanded. There is a new team structure in place: dancers are assigned to one of four teams (red, yellow, blue, green) for fundraising, instead of forming their own small fundraising teams .

Perhaps the biggest difference, according to Samara Lipman, co-chair of the marketing and media committee, is that three-quarters of students have not experienced DMs “in the tent,” a direct result of the effects of the pandemic.

“They were not there when the final total of the collection was announced, the checks were given to the representatives of the beneficiaries and the balloons were released at 1 a.m.,” she observes. Lipman said it’s been a year of transition, and while there may be fewer dancers in the tent and perhaps less money raised than in previous years, “it doesn’t diminish what we are doing here today”.

About 90 minutes before the end of the DM, the livestream abruptly stopped. Lipman confirmed that the team implemented their severe weather contingency plans due to high winds. Everyone was invited to move into the Norris Building and the marathon continued, “ending the evening on a high. Everyone safe,” she texted shortly after midnight.

Lipman spoke warmly of the friendships she made and what she learned from being a part of DM for four years. Last year, she and a guy she didn’t know well, a senior, were separately interested in being emcees, but neither had a partner to apply for the job. The board of directors brought them together. Now they even talk to each other every week, even though he lives in Denver, and they haven’t seen each other in a year. “You’ve spent so much time with these people, and they really see you in your true light,” she said.

Don Althschuler, one of the original members of the Alpha Tau Omega fraternity who designed the first NUDM in 1975, said in an email: “Of all the memories I cherish from my days in Evanston, the dance marathon is what I’m most proud of. .”

At 1:00 a.m., balloons were released, checks were handed out, executive co-chairs were celebrated, and the cheers didn’t stop. This year’s NUDM was one for the books, and the mantle passed to next year’s team.

What is Vladimir Putin’s net worth?

This Kansas teacher speaks out despite the risk: We must protect the integrity of public schools