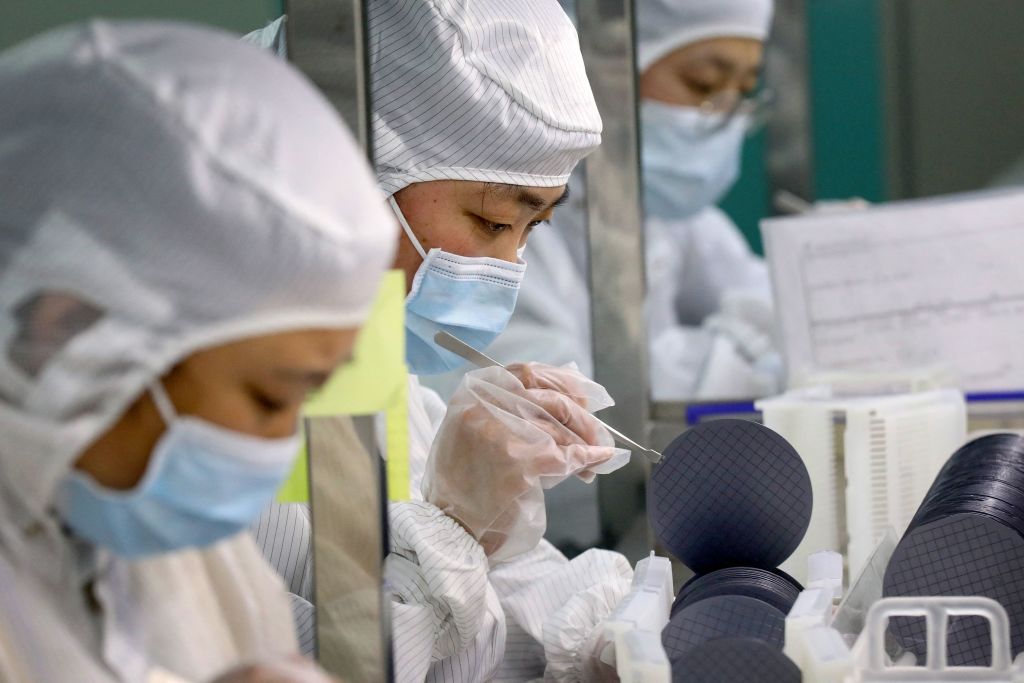 Pass the CHIPS, then pop the champagne

CHIPS Bill to Support U.S. Electronic Defense and Industrial Infrastructure Should Be Passed to Send Clear Message to China

NEW YORK — It’s rare to find socialist Sen. Bernie Sanders (I-Vt.) and conservative Fox News commentator Steve Moore on the same side of an issue, let alone legislation, but the bill CHIPS, which is expected to be introduced in the Senate next week, is just such an example.

I gladly oppose both, although Moore more so than Sanders.

The Creating Useful Incentives for Semiconductor Production for America Act, or the CHIPS for America Act (HR 7178), provides a wide variety of incentives and grants to support production, innovation and the expertise of national chips. (See this link for specific details.) The Congressional Budget Office (CBO) estimated the cost of the bill at $79 billion over nine years, through 2031.

Sanders sees the bill as ‘corporate welfare’, largely for Intel, Texas Instruments, Micron Technology, Global Foundries and Samsung, and demands that chipmakers give the US a stake in their companies in exchange for taxpayer support, refrain from share buybacks, do not outsource their work overseas, stick to their existing collective agreements and remain neutral in organizing efforts.

As what former Sen. Rick Santorum once dubbed a “blue-collar” conservative, there’s not much about Sanders’ position that I take issue with; perhaps his demand that the company “remain neutral” in organizing efforts. To the extent permitted by law, I believe companies have the right to present reasons why their workers should not be unionized so that they can make an informed decision. But other than that, they seem reasonable. (And, lest you question my own “conservative” good faith, my liberal friends think I make Steve Bannon look like Mr. Rogers.)

Moore’s opposition is more generalized and more ideological. Like most conservatives who came of age in the 1970s and 1980s, he has a libertarian bent, so he opposes government support for private enterprise. It’s a view he shares with Sanders, who says it “socializes all the risk and privatizes all the profit.” Sanders called the subsidies “crony capitalism” in a recent press release.

But both are wrong for different reasons, especially Moore.

Moore’s point of view is false, like most of the economic sciences which were born out of a blind fidelity to ideological dogma.

While it is taboo among my Conservative colleagues to “pick winners and losers” in the economy, this only seems to be the case when one reaches the pinnacle of politics on the national stage. I say this because virtually every Republican governor who has run for president in my lifetime has engaged in some form of what economists call “industrial policy.”

Industrial policy, as defined by the OECD, is “any type of selective government intervention or policy which attempts to alter the structure of production in favor (sic) of the sectors [or activities] which should offer better prospects for economic growth in a way that would not occur in the absence of such intervention in the market equilibrium.

Did your gubernatorial candidate give away an abandoned factor for $1 to a manufacturer who promised to make it productive again? Or engage in a “payment in lieu of taxes” or PILOT agreement to subsidize new business development? Then he became involved in industrial policy. Even presidential-flavored Republican Governor of the Month Ron DeSantis is doing industrial policy. But if DeSantis heads into the 2024 presidential campaign, you can probably bet on your next month’s rent or mortgage payment that he’ll loudly condemn “winner-and-lose picking” at some point in time. The electoral campaign.

Ditto with former South Carolina Governor Nikki Haley, another budding Republican candidate for president. She voiced her opposition to the CHIPS bill as an evil industrial policy of “picking winners and losers” that real conservatives are supposed to avoid like the black plague.

And, of course, to signal to the “conservative” Republican base, Haley resigned from Boeing’s board in 2020 to prove she was “conservative.” in good faith because his board colleagues all voted to receive federal government funding to help Boeing weather the pandemic.

I had to laugh a little bit at Haley’s move because there would be be no Boeing if it weren’t for American industrial policy. The reason why Boeing even exists—and that Boeing is the world leader in the production of commercial airliners, it is because it developed the first commercially viable airliner, the legendary Boeing 707. But the 707 was built on the airframe of the Boeing KC-135 Stratotanker, the “flying gas station”. from the US Air Force, after adopting the practice of in-flight refueling of other aircraft in the 1950s! (The industrial policy that created Boeing continues today, with the Boeing 767, shown in this link, being built on the same airframe as the KC-45 Pegasus tanker, shown in this one.)

The fact is, industrial policy conservatives like Haley and Moore abhor were the backbone of most American innovation and development for most of the 20th century. The wristwatch; four-wheel drive trucks and utility vehicles; Tissues, tea bags, toilet paper and tampons – even much of the food in your child’s lunchbox – all originated from US or allied governments seeking to meet a sometimes urgent government need. , usually in times of war.

In the civil field, Patent No. US6799176B1, described as a “Method of Scoring Documents in a Linked Database”, was funded by a government grant from the National Science Foundation. You know it better as “Google”. The Internet itself is derived from a Defense Advanced Research Projects Agency (DARPA) program.

And even before that, in the early days of the nation, the government picked “winners and losers.” While Congress set aside Hamilton’s “Report on the Manufactures” when it introduced it in 1791, it enacted the tariffs it recommended only six months later. Everything from the Telegraph to the Transcontinental Railway is said to come from the government “picking winners and losers.”

Our course, our politics, and our business can engender, if not corruption, at least its appearance and, certainly, its desirability. This has been proven from the Teapot Dome scandal to the Obama administration’s Solyndra scandal. It is therefore essential that public funding or incentives from private companies are completely transparent, with detailed reports on expenditure in an “online” checkbook, as well as strict and continuous monitoring, frequent audits and other tools. to ensure that money is not wasted. .

The CHIPS bill is a necessary part of maintaining both our national defense and our economic security. It should not be thwarted by libertarian dogma, which in many cases is simply wrong.

Chips are as essential to maintaining a resilient national defense infrastructure today as ball bearings were to The Greatest Generation’s defense infrastructure during World War II. Not only must there be a source of supply here in the United States, but we must innovate and maintain it, including “legacy” chips for our old defense systems. (Fun fact: Although overhauled and improved, the Boeing B-52 will have been a staple of America’s defense arsenal for 75 years by the end of this decade.)

And that’s not to mention the chips we use in our cars, computers, major appliances, and internet infrastructure. They are what logistics and supply chain experts call “mission critical”. What you want to do can’t be done without chips and a ready supply of them. (I speak from experience. When our old dishwasher broke in October, but was still under warranty, we were told the chip to fix it wouldn’t be available until February. February!)

The relocation of chip manufacturing to the United States could be misinterpreted by China as our “withdrawal” from Taiwan, because Taiwan chips are so essential to our economy. This could send a dangerous and unintended message to Beijing and the Chinese Communist Party’s warring elements. It shouldn’t be, and Congress and the President should make sure it isn’t.

To make this clear to the world, at the same time as the signing of the CHIPS Bill, President Joe Biden should announce – clearly and unequivocally – and surrounded by the leaders of both houses of Congress as well as Australian ambassadors , India, Japan, and South Korea – that we have abandoned our policy of “strategic ambiguity” toward Taiwan in favor of “strategic certainty” – that the United States will fully defend Taiwan against Chinese aggression, especially invasion, and that any attempt to “quarantine” – blockade – the island by the Chinese Navy or interfere with Taiwan’s airspace, will be treated by the United States as a act of war against Taiwan and the United States.

To further support it, we should offer an additional arms sale to Taiwan to defend itself and schedule joint exercises with “The Quad” – Japan, Australia, India and us – to protect the Taiwan Strait.

Taiwan means much more to the United States than being the world’s largest chipmaker. It is at stake for our defense of the freedom of the seas and the support of refugee populations fleeing persecution by nations hostile to American interests, the very reason why Taiwan was born after the communist takeover of China.

We must make it clear to all concerned that improving our own defense will never be achieved by abandoning the sacred bond of a long-standing, ancient and important ally.

JG Collins is Managing Director of Stuyvesant Square Consultancy, a strategy consulting, market research and advisory firm in New York. His writings on economics, business, politics and public policy have appeared in Forbes, the New York Post, Crain’s New York Business, The Hill, The American Conservative and other publications.