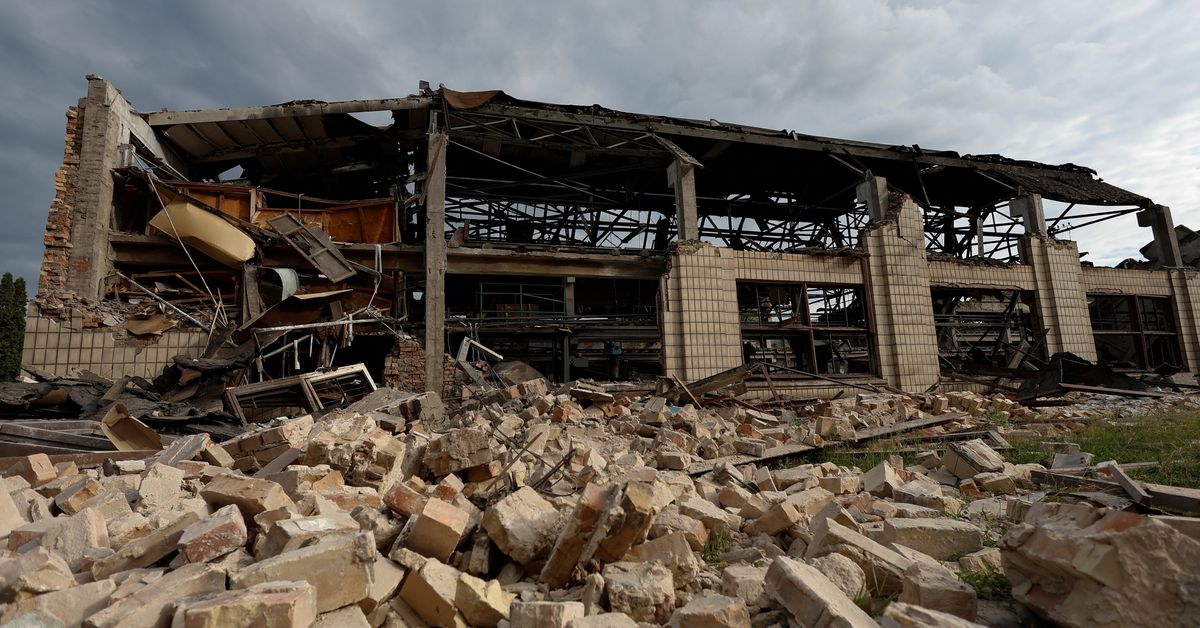 KYIV, June 6 (Reuters) – Russia has hit Kyiv with missiles for the first time in more than a month, while President Vladimir Putin has warned it will hit new targets in Ukraine if Western countries supply the longer-range missiles.

In Sievierodonetsk, the main battleground in the east where Russia has concentrated its forces, Ukrainian forces are holding out after retaking half of the city, said Serhiy Gaidai, governor of Luhansk province where the city is located.

Ukrainian President Volodymyr Zelenskiy said on Sunday he had visited Lysychansk, south of Sievierodonetsk, and Soledar – rare outings for him outside Kyiv since the start of the Russian invasion on February 24 and could be still closest to the front line. Read more

“What you all deserve is victory – that’s the most important thing. But not at any cost,” Zelenskiy, wearing his khaki t-shirt, told Ukrainian troops in a video broadcast Sunday evening. Read more

Lysychansk and Sievierodonetsk are in Luhansk region and Soledar is in Donetsk region. The two regions make up Donbass, the industrial heartland of Ukraine, which Russia claims is on a mission to “liberate”.

During the Kyiv attack, one person was hospitalized although no immediate deaths were reported. Black smoke could be seen several kilometers away after Russia attacked two outlying districts on Sunday.

Oleksandr Kamyshin, head of Ukrainian railways, confirmed that four missiles hit the Darnytsia wagon repair plant in eastern Kyiv, but said there was no military equipment at the site .

The strike was a sudden reminder of war in Kyiv where normal life has largely returned since Russian forces were driven from its outskirts in March.

“The missile strikes in Kyiv have only one goal: to kill as many people as possible,” Ukrainian presidential adviser Mykhailo Podolyak said on Twitter.

Ukraine said Russia carried out the attack on Kyiv using long-range air-launched missiles fired from heavy bombers as far away as the Caspian Sea.

Sunday’s attack was the first major strike on Kyiv since late April, when a missile killed a journalist.

Russia has recently focused its destructive power on the frontlines in the east and south, though it occasionally strikes elsewhere in what it calls a campaign to degrade Ukraine’s military infrastructure and block Western arms deliveries.

Putin has warned the West that Russia will strike new targets if the United States starts supplying Ukraine with longer-range missiles, the TASS news agency reported on Sunday. Read more

In an interview on Russian state television, Putin said the rockets Washington had promised so far were comparable to Soviet-era weapons Ukraine already possessed, Putin said.

If Washington were to deliver longer-range rockets, “we’ll hit the targets we haven’t hit yet,” he said. He dismissed the impact of Western drones, saying Russia had “cracked them like nuts”.

Britain has said it will supply Ukraine with multiple-launch rocket systems that can hit targets up to 80 km (50 miles) away. Read more

Heavy fighting continues in Sievierodonetsk and Russian forces are pushing towards Sloviansk, the UK Ministry of Defense said in a Twitter update. Read more

However, Governor Gaidai said earlier that Ukrainian forces were continuing to push the Russians back from Sievierodonetsk, about 85 km (53 miles) east of Sloviansk. Read more

The claims could not be independently verified. Both sides say they have inflicted huge losses on Sievierodonetsk.

In Lysychansk, Russian forces fired at a bakery and several administrative and residential buildings, Gaidai said on Monday, adding that one civilian was injured.

Evacuations resumed from the Ukrainian part of Luhansk province on Sunday, and 98 people escaped, Gaidai said.

Western Kursk Region Governor Roman Starovoit said the border village of Tyotkino came under Ukrainian fire this morning which targeted a bridge and local businesses. There were no immediate reports of casualties.

Ukraine’s military reported that its forces repelled seven attacks in the Donetsk and Luhansk regions on Sunday, destroying four tanks and downing a helicopter gunship.

Russian forces are “conducting intensive artillery and mortar fire on our positions” in the Kharkiv region of Donetsk, the Ukrainian military staff announced on Monday.

He said Russia was targeting civilian infrastructure in several cities. Moscow denies that it targets civilians.

In a speech in Rome on Sunday, Pope Francis called the war a “negation of God’s dream”.