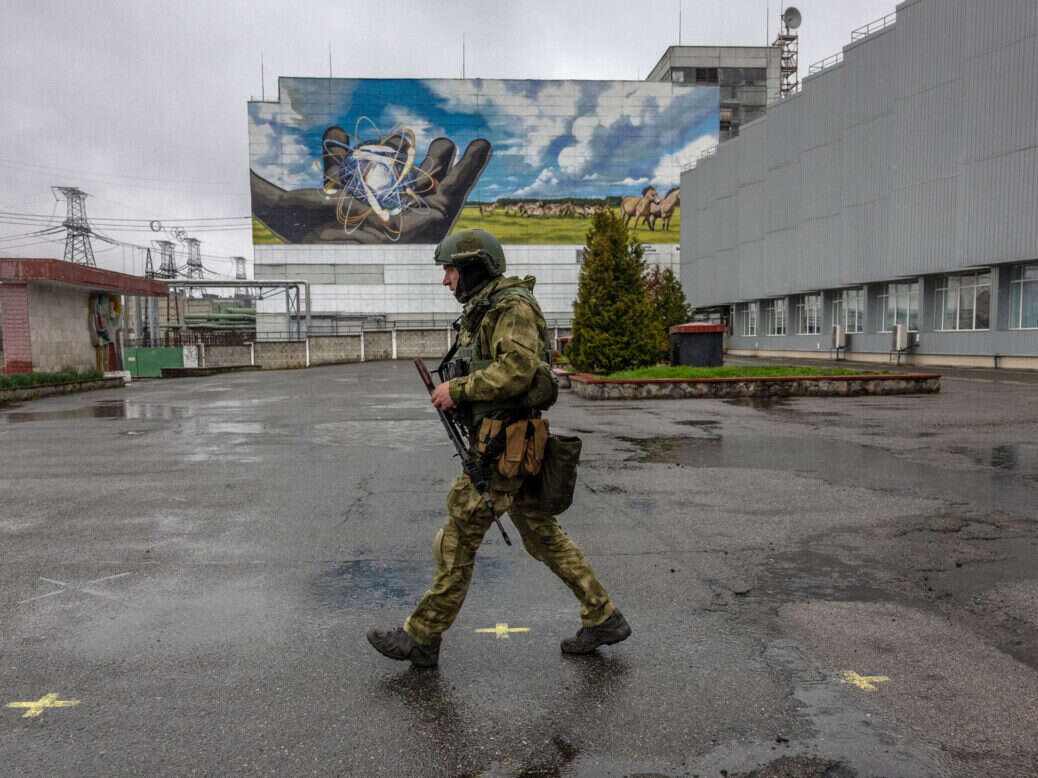 Serhii Plokhy: “The Ukrainian army that no one has ever known about is winning”

Across the Kakhovka reservoir, the Zaporizhzhia nuclear power plant – the largest in Europe – looks like a fortress, its six reactors crouched like watchtowers along the shore. But it was never designed to withstand the March 3 attack, eight days after the start of the war in Ukraine. Russian planes bombed it from the air, damaging buildings around one of the reactors. That it did not become another Chernobyl was more chance than intention.

Ukraine is the country of Chernobyl, and Serhii Plokhy is the eminent historian of this catastrophe. His new book, Atoms and Ashes: From Bikini Atoll to Fukushima, is a story of the nuclear age, told through the analysis of six of its worst disasters. For Plokhy, a professor of Ukrainian history at Harvard and author of several best-selling books, the common theme of secrecy connects every disaster.

“Nobody really likes breaking bad news,” he told me in an interview at his publisher in London. Two of the accidents – Chernobyl and the 1957 explosion at Kyshtym – occurred in what was then the Soviet Union. Kyshtym only became public in 1989, although it was second only to Chernobyl in terms of the amount of radiation emitted.

The authorities, he said, “could really get away with murder because all the media was controlled. The atmosphere of secrecy that came from the Cold War really extended far beyond the realm of military production…whether they produced bombs or electricity, it was still top secret. And we see, to some extent, the same kind of situation… in Russia today.

The past three months have been ‘an endless nightmare’ for Plokhy, who was born in Russia but grew up in Ukraine; he obtained his Ph.D. from Kyiv University. He discovered that the war had started by e-mail; a colleague in Ukraine asked to send his files to a safe place because he was leaving town.

“You go to bed and you hope to wake up in the ‘normal’ world, and you wake up in the ongoing nightmare. I found a kind of balance by really continuing my work and talking to the public, to journalists on subjects that I had studied before, so it was a way for me, emotionally, to stay focused and not crash,” he explained.

[See also: The risks of nuclear power in an increasingly destabilised world]

Falling out of favor after the explosions in Fukushima, Japan, in 2011, nuclear power is gaining popularity again – as a way to reduce both Europe’s energy dependence on Russia and carbon emissions. Britain’s energy strategy published in April envisages the construction of up to eight new reactors, even though the Hinkley Point C power station currently under construction is £3 billion over budget and is delayed by more than a year.

Plokhy has acknowledged the value of nuclear in limiting climate change but maintains reservations, in part because of the cost of disposing of the waste. Design flaws contributed to the Chernobyl disaster, but even the best-designed reactor can be overwhelmed by an unforeseen event: a war, as in Ukraine, or a tsunami, as in Fukushima. He criticized Germany for shutting down its nuclear reactors – any environmental damage caused by their construction had already been done – but said now was the time to look at renewables.

“I don’t think it makes much sense to invest in 20th century technology,” he argued. “Let’s look at 21st century technologies… We don’t have unlimited capacity, so we need to think about investing money in industries that can tackle climate change without creating the kind of environmental risk that nuclear does. creates.

Plokhy rejected the distinction between “atoms for war” and “atoms for peace”. Every nuclear reactor in use today, he pointed out, was built to a design suitable for military purposes. None were designed specifically for boiling water. New reactors are now being developed specifically for civilian use, but even then “everything you can think of starts with a very difficult period of trial and error and learning.”

Chernobyl and the giant concrete sarcophagus containing the wreckage of what is still the world’s worst nuclear accident loomed large throughout our conversation. From the first day of the war in Ukraine, the ruins of Chernobyl were overrun by soldiers in unmarked uniforms – Russians, but not declared as such. The tracks of their armored vehicles kicked up highly radioactive dust, but as Plokhy pointed out, Russia, “the power that was responsible for bringing war to nuclear sites for the first time in history”, n didn’t say anything at first. As with the nuclear power plant explosion in 1986, secrecy – or at least denial – prevailed.

[See also: How Putin weaponised the environment in Ukraine]

Four of the six accidents described in Atoms and ashes results from the nuclear ambitions of the democratic powers: Windscale (United Kingdom), Fukushima (Japan), Three Mile Island and Bikini Atoll (United States), and Plokhy does not exempt them from criticism. However, democratic governments have more incentive to be open with their citizens because they will face a political score settling, he said.

“The authoritarian government, of course, to stay politically alive, engages in cover-up as much as possible,” he said. “In societies where information is limited, the negative impact on health, on the environment, is much, much greater than in open and democratic societies.”

The bottom line? “When an accident happens and you are someone living nearby, your chances of protecting yourself are much better if you live in a democracy.”

The unchecked authoritarian penchant for secrecy manifests itself in other ways. The Russian army expected to conquer the Ukraine within days; instead, more than three months later, it finds itself mired in a crushing war of attrition, destroying city after city at a horrific cost in lives and material. The Ukrainian military, meanwhile, trusted commanders on the ground more to make their own decisions, drawing on years of training with NATO nations.

“The Miracle on the Dnieper [river]called Plokhy, visibly proud of his country.

“Ukraine was one of the few post-Soviet countries where, in fact, democracy prevailed,” he said. “There were two attempts to introduce a form of authoritarianism, and they were defeated by two revolutions on the Maidan,” he added, referring to the Kyiv protests in 2004-05 and 2014.

“This is the case where this NATO philosophy of waging war and Ukrainian political philosophy clicked and produced this miracle,” he said. “And now we see the army no one ever knew existed fighting the world’s most feared army and winning.”

[See also: Why Putin’s war in Ukraine turned into a military disaster]