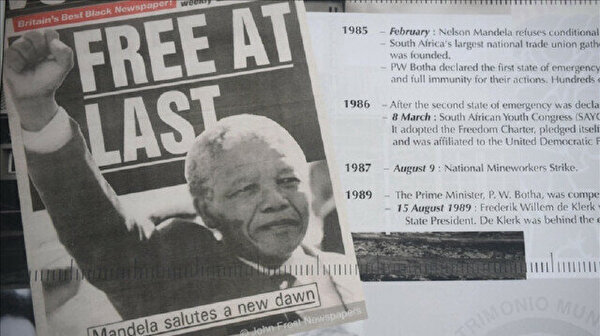 Activist and lawyer Mandela had spent 27 years in prison for opposing apartheid which dehumanized black Africans by reducing them to second-class citizens in their country of birth.

“The release of Mandela put South Africa on the path to peace and majority rule, but by no means ended apartheid and racism,” said Dr Mustafa Mheta, senior researcher at the Media Review Network, a Johannesburg-based think tank. tank, told Anadolu Agency.

He said Mandela’s release also averted imminent bloodshed and civil war in the country at the time.

“Racism is much more alive in South Africa than before. It’s chaos with people of all races accusing and counter-accusing each other,” he said.

Mheta, however, credits FW De Klerk, the last apartheid president who died last November at the age of 85, with the immense contribution to South Africa’s current democratic dispensation.

“I think the country should honor De Klerk. He could have chosen to ignore and let the war go on unabated, but he saw the meaning with Mandela to sit down and talk resulting in the democratic dispensation that the country is currently benefiting from,” he said over the phone.

The legacy of De Klerk, who served as president from September 1989 to May 1994, has drawn mixed reactions, with some praising his role in ending apartheid and others accusing him of being responsible for the murders of people under the system of government.

De Klerk, who shared the 1993 Nobel Peace Prize with Mandela, also served as vice president under the new Democratic dispensation under Mandela in 1994.

Some South Africans had criticized De Klerk for not apologizing for apartheid crimes such as treating millions of black people as inferior and sending them to black homelands.

However, his foundation released a video shortly after his death in November showing a frail-looking De Klerk responding to criticism in a video message.

“Allow me today, in the last message to repeat: I apologize, unreservedly, for the pain and hurt, indignity and damage caused to the Blacks, Browns and Indians of South Africa “, did he declare.

The former president said his view of apartheid had changed since the early 1980s.

Political commentator Iqbal Jassat said that although Mandela’s release was a watershed moment, the role of the massive uprising of the oppressed masses demanding an end to apartheid and white supremacy should not be overlooked.

“The push for change had been going on for decades, both nationally and internationally,” he said, adding: “So if it’s true that De Klerk’s decision paved the way for a negotiated settlement that ushered in democracy, we would be naïve to believe that he was benevolent.

“While debate rages over whether or not the turning point was De Klerk’s announcement of Mandela’s release, the fact is that apartheid had become untenable – both in theory and in practice. “, said Jassat.

Saber Ahmed Jazbhay, a prominent South African lawyer, told Anadolu Agency: “De Klerk acted as the bearer of a dying ideology. He had no choice but to free Mandela in order to defuse the mounting pressure that would have sparked a full-scale interracial civil war.