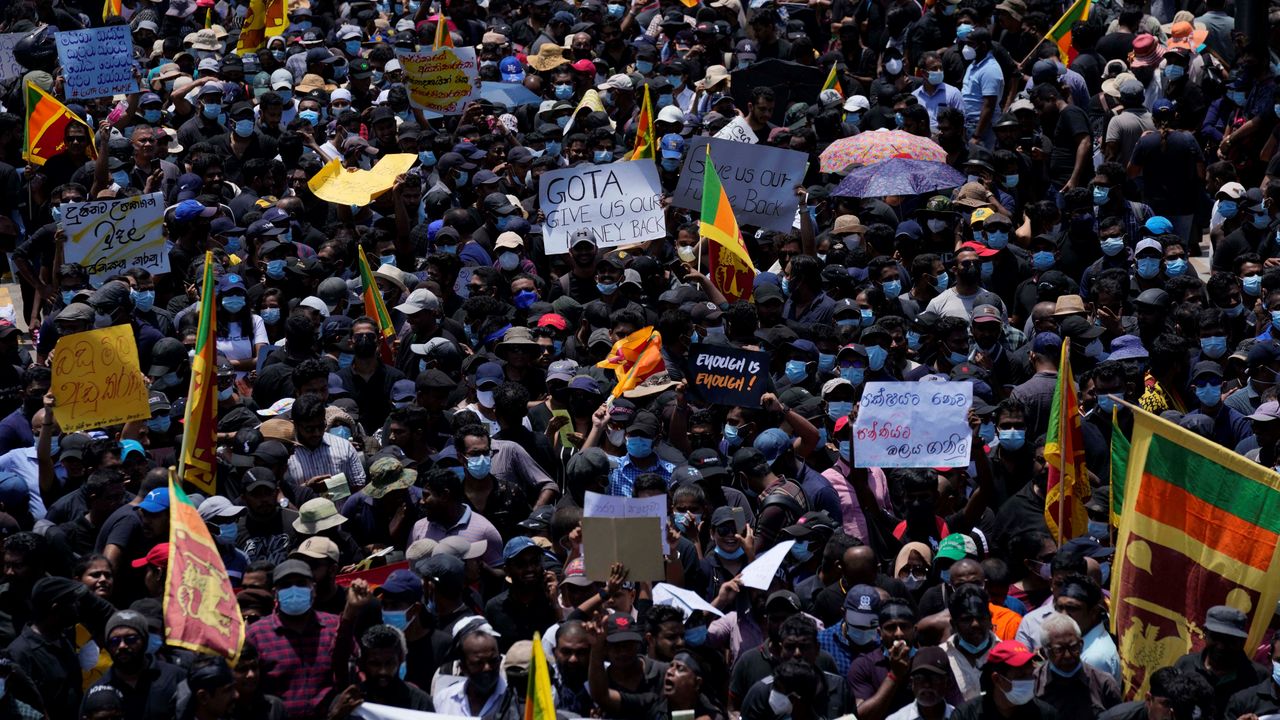 The Socialist Equality Party, the Sri Lankan branch of the International Committee of the Fourth International, issued the following statement in Sinhalese and Tamil on May 10. in downtown Colombo. The attack backfired. Spontaneous walkouts by postal, health and other workers forced unions to call an indefinite general strike and the prime minister, President Gotabhaya Rajapakse’s brother, Mahindha Rajapakse, resigned.

As the statement clarifies, the SEP fights for the independent political mobilization of the working class against the ongoing preparations by President Rajapakse and the military to violently suppress mass protests against the government, and parallel attempts to deceive the masses by setting up an “interim” government, including the opposition parties, but no less determined to impose austerity on the International Monetary Fund.

Faced with unbearable conditions due to draconian attacks on social and democratic rights by the government, shortages of basic necessities and soaring prices, and daily power cuts lasting several hours, masses of workers, youth and the rural poor have started an indefinite demonstration demanding that President Gotabhaya Rajapakse and his government step down.

Monday’s senseless attack clearly exposed the extremely dangerous situation facing the masses in this struggle. In these circumstances, the working class must intervene independently to ensure the security and supply of essential items, including food and services necessary for people’s lives.

As part of this network of action committees to ensure essential services and defend democratic rights, the SEP insists that defense committees and defense guards be set up to defend the masses against the attacks of the morons of the government.

By allowing thugs to freely carry out their attacks on the Galle Face protest site, the police have once again shown that there is no security for the working class, youth and rural poor from the security forces and police that are part of state capitalism. The true function of the police was demonstrated in the killing of Chaminda Lakshan and injuring several dozen others when police fired on unarmed protesters in Rambukkana.

To secure its basic needs and defense, the working class cannot trust the unions to lead a struggle against the government and its attacks. From the outset of the protest movement, the unions blocked independent intervention by the working class. They were forced to call two general strikes – April 28 and May 6 – due to enormous pressure from the workers.

The unbearable social conditions faced by workers, youth and the poor will not disappear under any capitalist government. Like the government, all capitalist parties, including the Janatha Vimukthi Peramuna (JVP) and the pseudo-left Frontline Socialist Party (FSP), have agreed to implement the vicious anti-worker austerity program demanded by the Monetary Fund international (IMF).

In such a situation, it is inevitable that workers will be forced to enter into struggle against the capitalist system in order to defend their social and democratic rights. Such a struggle will only be crowned with success if its political and practical preparation is carried out under the leadership of the working class. This highlights the urgency of creating workers’ action committees.

Action committees are a form of organization in which workers and the poor establish their unity against the capitalist system, democratically across all communal or linguistic divides. He set himself the goal of forming a workers’ and peasants’ government as an alternative to bourgeois domination. Without a progressive political perspective, outbursts of anger, such as those that led to the destruction of property on Monday night, only strengthen the hands of government and reaction.

While capitalism has revealed its utter inability to meet the needs of the masses, a network of action committees built under the leadership of the working class can organize to meet the basic needs of all. Rural action committees can provide essential fertilizers to poor farmers, direct the harvest to markets, provide storage facilities and decide prices.

We propose the following program and policies to animate the work of action committees to meet the pressing needs of the masses:

· For workers’ democratic control over the production and distribution of all essentials and other critical resources for people’s lives! Nationalize the banks, the big companies, the plantations and other big economic nerve centers!

The capitalist class exploits its ownership of the means of production and distribution to amass huge profits. The only way for the working class to meet its basic needs is to take them out of the hands of the capitalists and take stock of the resources so that they can be used to end the present suffering and misery.

· Repudiate all foreign debts! No to the austerity demands of the IMF and the World Bank which represent the bankers and the international financial institutions!

The Rajapakse government attributes its harsh austerity measures to the need to repay billions of dollars to world bankers. Opposition parties agree. Instead of the $7 billion due this year pouring into the coffers of international banks, it should be used to pay for food, fuel, medicine and other essentials needed by workers.

· Seize the colossal wealth of billionaires and corporations!

According to the Global Inequality Database, in 2021, the richest 10% of Sri Lankan society held 63.8% of the island’s total wealth, while the poorest 50% did not. owned only 4.3%. This immense wealth that has been created by the working class must be seized and distributed on the basis of social need.

· Cancel all debts of poor and marginal farmers and small business owners! Restore all subsidies, including fertilizer subsidies for farmers!

By providing a way out of their crippling economic problems, the working class will become a magnet for the oppressed rural masses and small business operators who are burdened with high debt, expensive inputs and prices that do not meet their basic needs.

· Guarantee jobs for all with decent and safe working conditions! Index wages to the cost of living!

If the IMF and the international bankers have their way, there will be an avalanche of job destruction. Inflation has already raged and eroded wages. Left in the hands of the unions, jobs, wages and working conditions will still be negotiated, as they have been for years.

Workers fighting in Sri Lanka share a common trench with their common class brothers and sisters and class enemies. The rising tide of class struggle around the world gives Sri Lankan workers potential allies and bases of support in factories, workplaces and offices everywhere.

This can turn into an internationally coordinated struggle against the economic dominance of global corporations, banks and finance houses to end capitalism. Action committees built in Sri Lanka are to unite with the International Alliance of Rank and File Committee Workers (IWA-RFC), which was launched by the International Committee of the Fourth International (ICFI).

The Socialist Equality Party must also issue a warning. The Rajapakse regime, like its predecessors dating back to formal independence in 1948, and its racist allies will resort to communal provocations and the poison of Sinhalese chauvinism in a desperate effort to divide Sinhalese, Tamil and Muslim workers along ethnic lines. However, all workers and the poor face the same desperate economic crisis. The rejection of all forms of nationalism and communalism is essential to building working class unity in Sri Lanka and around the world.

A socialist revolution is needed in Sri Lanka and for this a revolutionary leadership is essential. The whole history of the last century has demonstrated that without a revolutionary party, even the most militant and determined struggles of the working class are inevitably defeated, opening the door to counter-revolution and savage repression.

We urge workers and young people who agree with this program to join the Socialist Equality Party and make it the mass party of the working class.