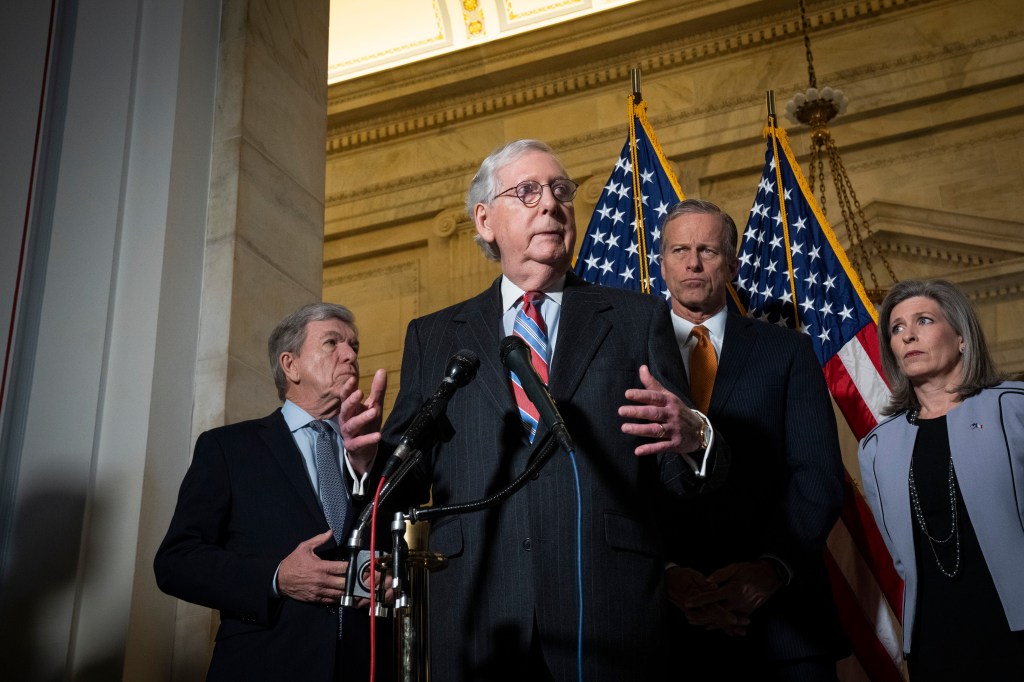 The hopeful spark of a Trump GOP revolt?

Republicans are in the fight of their lives for the soul of their party, a fight that will have profound implications for our democracy. Three sides emerged: the good, the bad and the ugly.

First, there are the villains, also known as Trumpers. Former President Trump waged a war on truth, our democratic institutions, and he created an alternate reality that threatens the stability of our republic.

His supporters treat him like a cult hero, drink his Kool-Aid, trash our democracy and endorse his baseless allegations of massive voter fraud in the 2020 election. Orthodox Trumpers violently stormed Congress during the January 6 uprising that injured dozens of officers.

Trump has gone so far as to promise pardons for these terrorists because he believes they are being treated unfairly.

The New York Times published a story last week that Trump was intimately involved in plans to use national security agencies to illegally seize voting machines in swing states six weeks after the election ended. Dictatorship anyone? Imagine the damage a second term could bring.

Cheney’s colleagues already excommunicated her from her number three Republican House leadership position in the House for her criticism of Trump last May.

The Trumpers have made the continued viability of our democracy the most important issue on the ballot in 2022. An NPR/Ispos poll last month found that 64% of Americans think our democracy is ‘in crisis and at risk of failing’. .

Then there’s the ugly wing, desperately trying to see nothing, hear nothing, and say nothing. Trump put this set of Republicans to the test and they chose self-preservation over the preservation of our democracy because they are afraid the Trumpers will end their careers.

Trump mowed down the ugly with his bullying tactics and the threat of a primary. Trump has identified 10 Republican House members he would like to defeat and backed key challengers against GOP governors, such as Georgia Gov. Brian Kemp. Trump has vowed to defeat Kemp after he failed to meet her demands to void the election and actively campaign for former U.S. Senator David Perdue.

Gubernatorial candidate and University of Colorado regent Heidi Ganahl is among the Republicans trying to avoid the issue. She refused to answer the simple question of whether the 2020 election was fraudulent, hypocritically dismissing it as a “divisive issue”. Or probably presidential candidate and former UN ambassador Nikki Haley who said Mike Pence did the right thing by certifying the Electoral College count, but berated the former vice president for “Republicans going against the Republicans”.

The ugly Republicans are trying to navigate these turbulent waters in order to avoid a primary but want to be able to pivot for the general election.

This dog will not hunt in Colorado where voters know best.

You can either defend something or fall into anything. And, unless the ugly find their backbone and rise for the time being, they cannot effectively lead, let alone return the Republican Party to its roots or preserve our democracy.

Finally, there are the good guys, the Republicans of Abraham Lincoln and Ronald Reagan, who embody core traditional Republican values ​​and will fight hard for our fragile democracy.

These are the ones I support.

Trump called this group the RINOs (Republicans In Name Only), but they are actually the real Republicans.

Following Pence’s statement, Minority Leader Mitch McConnell criticized RNC censorship and said Jan. 6 was a “violent insurrection in an effort to try to prevent a peaceful transfer of power after a legitimately elected certified from one administration to another”. Other key Republicans have begun to distance themselves from Trump and have followed suit as they show signs of a possible GOP revolt.

When Sen. Mike Rounds (R-South Dakota) said on a weekly news program last month that the election was fair and had dispelled the Big Lier, Trump responded by asking if Rounds was stupid or crazy. Other Republican senators like Mitt Romney (R-Utah) and John Thune (R-North Dakota) also supported him. Hopefully this is a sign that key Republican leaders are ready to join the good fight and take the party back.

Whether in the primary or in the legislative elections, we must demand that all Republican candidates in 2022 answer these two crucial questions.

Do you believe Trump’s big lie that the system is rigged and that there was widespread voter fraud that cost him the election? Spoiler alert: there’s no such evidence unless you live in an alternate universe.

If the good cannot transform the ugly and defeat the bad, there is much more at stake than the future of the Republican Party: but rather the future of our democracy. In the words of Benjamin Franklin, it’s a republic, if we can keep it.

Doug Friednash is a Denver native, a partner at the law firm Brownstein Hyatt Farber and Schreck and former chief of staff to Governor John Hickenlooper.

To send a letter to the editor about this article, submit it online or see our guidelines for how to submit by email or mail.

This time Javier Milei’s draw was won by a libertarian: ‘He played on our side’