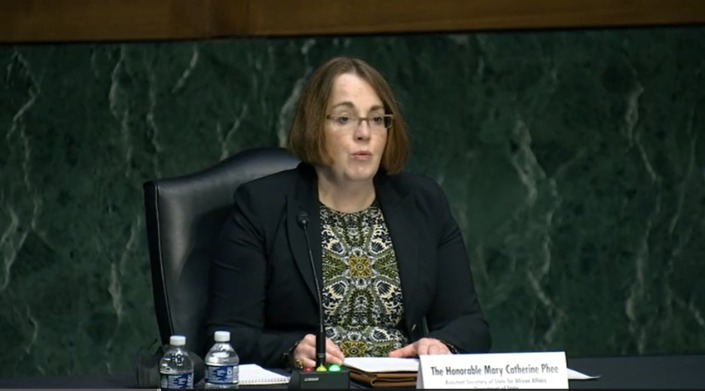 Feb. 1, 2022 (KHARTOUM) – The situation in Sudan provides an opportunity to find a diplomatic solution to the Sudanese crisis and bring the military to restore the democratic transition, US Assistant Secretary of State for African Affairs Molly Phee said on Tuesday.

The US Senate Foreign Relations Committee held a hearing on US policy following the Oct. 25 coup in Sudan, during which they expressed frustration and disappointment at the lack of strong action against the Sudanese army.

In his testimony before the Senate, Phee explained that they had suspended economic aid. In addition, they are preparing new measures to reduce the funds available to the Sudanese army, including targeting companies controlled by the army and sanctioning those who deal with them.

However, Democratic Sen. Bob Mendez, chairman of the committee, and Sen. Jim Risch, the top Republican on the panel, criticized the soft approach.

Mendez went further, talking about the Biden administration’s “failure” to deal with the Sudanese military and called for targeted individual sanctions.

In its response to similar criticism from Senator Risch, the United States. the senior diplomat for Africa said that she believes that the current conditions in Sudan still allow for a smart return to democratic transition in Sudan

She first underlined the determination of the Sudanese people to resist the coup and restore democratic rule in their country.

“I haven’t seen that kind of strength and cohesion in other different environments I’ve worked in,” Phee said.

After that, she pointed the finger at the military forces in Sudan saying that they are not “monolithic”.

“Some of them would really like to make the transition but they don’t know how to do it,” she added.

“I really think there is an opportunity for diplomacy here,” she said.

The diplomat further mentioned the unprecedented regional and international support to the Sudanese in their quest for democracy.

“I believe this strength that we haven’t seen in other environments.”

“We must continue to support them. Not surprisingly, this transition is difficult. We must have an approach that can absorb shocks that would be unavoidable and continue to push and continue to provide this type of technical assistance,” she concluded.

Click here to read the U.S. Under Secretary for Africa’s statement to the Senate on the Sudan crisis

Damon Young: How does it feel to lose a friend to covid conspiracy theories