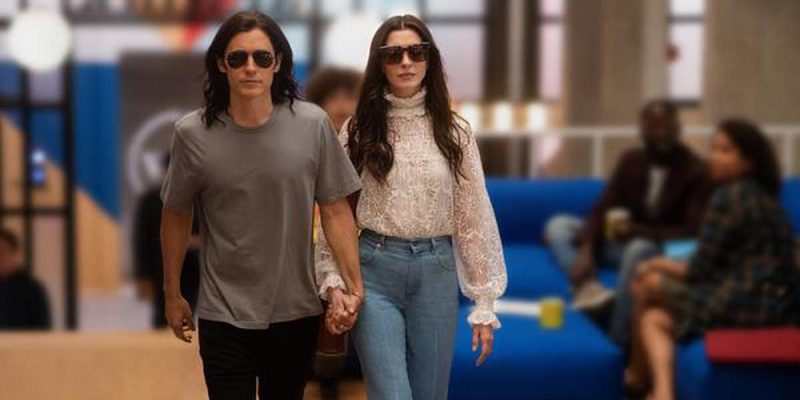 ‘WeCrashed’, a gripping story of genre capitalist greed that delights everyone

Adam Neumann, an Israeli-American businessman, lived for the money, especially for the money that wasn’t his. He co-founded a co-working startup, WeWork, in 2010. In less than a decade, he’s raised more than $10 billion, charming hard-nosed moneybags: JP Morgan Chase, Benchmark Capital, SoftBank, and many more. In January 2019, WeWork was valued at $47 billion; less than nine months later, the board fired Adam.

But that descent isn’t the most shocking part of Adam’s journey — not even close — because the entire sweep, chronicled in a new AppleTV+ docudrama, We crashedwill raise at least one major question: did he run a business, a cult or a circus?

Spanning eight episodes – each clocked in at an hour – We crashed (Apple TV+) is long and dense. It packs subplots into subplots, relationships into relationships, disappointments into disappointments. But let me tell you what We crashed is not: the story of a “tech” start-up, the story of Adam (Jared Leto) sold the world. Because WeWork had nothing to do with technology. It was a good old real estate business. He’s rented out numerous properties around the world, converted them into sleek common spaces, expanded at lightning speed, and floored investors (all while suffering huge losses).

So what is it We crashed mainly on? It’s a story of madness, shared delusions, impossible beginnings. It is also the story of a capitalism in crisis. Adam founded WeWork two years after the Great Recession and a year before Occupy Wall Street. How do you infuse your company with meaning in such a climate – find loyal followers on low pay and limited benefits? Well, you learn from Adam: Tell your employees that their job wasn’t…work, that WeWork wasn’t just any other company, that they could change the world. It was capitalism filmed through an Instagram filter. His mission ? “To elevate the consciousness of the world”.

We crashed begins with Adam’s journey – his initial failures, his dream, his drive – which continues into another: Rebekah (Anne Hathaway), his girlfriend-turned-wife. The envy of her famous cousin, actor Gwyneth Paltrow, and her ambitions as a nurse, she’s as fascinating a character study, if not more so, than Adam. Both are young, hungry, desperate – and they only have each other. She has great ideas about acting; he has great business ideas. It’s a classic Double Madness (a psychiatric state where one partner transmits his delusions to the other). Which isn’t a bad thing in itself: is it true love if it has no shared illusion component?

The first two episodes, following a standard chronological structure, establish the characters and stakes well. Creators Drew Crevello and Lee Eisenberg sprinkle clues everywhere. We see Adam pulling small drawbacks, cutting corners, relying more on his bombast than his talent. We see Rebekah trying, failing, trying. We see their true love for each other. We see what she can’t: that Adam will become what she couldn’t, a star.

The slow escalation finds new edge in the third episode, which is set at a summer camp in 2012. WeWork employees party and get drunk, applauding Adam’s speech like cult followers. And then, the first signs of trouble. Rebekah says on stage, “A big part of being a woman is helping men manifest their calling in life.” Millennial workers resent anti-feminist sentiment, complain about long working hours, low pay and a hostile work environment (generating several complaints of sexual harassment).

But in the history of WeWork, this is all just breakfast.

Because from the fourth episode, it goes into the dirty financial details. WeWork is losing money four years later – $1.2 million to $1.9 million to $2.1 million a day. This is where the series begins to shine, going from the madness of two to the madness of many. Because it’s not just Adam who is manipulative; he manipulates his employees to manipulate others. Before the visit of a potential investor, he “trains” them to behave in the right way, demonstrating a relaxed working atmosphere. He lays off 7% of the workforce, then throws a lavish party.

Watching the show, I thought to myself more than once, ‘What were the employees thinking? Why not just leave? It occurred to me later that We crashed is also a story of toxic bonding, where it’s impossible to know when love ends and abuse begins. But of course, it wasn’t just the employees. What about investors and journalists? JP Morgan grants him a credit limit of 100 million dollars (he asked for 50 million dollars): he buys a plane and opens 21 new branches. It is on Time’s 100 list. You can almost feel the desperation of his admirers: that they all wanted a hero of capitalism – a “savior” – so badly that all nights were days for them.

Manufacturers never insist on this point, but the implications are obvious: that we, as a society, have an unhealthy obsession with (and an inordinate indulgence for) the wealthy. Sweet, charming, magnetic but also petty and deceptive and soulless: look around you, you will see such stories everywhere. Theranos founder Elizabeth Holmes; Billy McFarland of the Fyre Festival; Vijay Mallya – of course – and these are just some of the big names of recent years. In fact, why go far, there is a probable scam in the same family. Do you remember Rebekah’s cousin, Gwyneth? Well, she owns a lifestyle company, Goop, which has been criticized for years for peddling pseudoscience at exorbitant prices. She once endorsed bee sting therapy on the Goop website – the same treatment caused the death of a 55-year-old woman in 2018. (The same year, the company was valued at $250 million.)

Since the entire series is a house of cards built on multi-tiered deceptions, each episode essentially tells the same story. Adam does something crazy, gets rewarded, and gets even crazier. Such a drama risks being monotonous and predictable, but the writing is so sharp, so dynamic, that the show is never confusing (even for someone like me, who had seen a Netflix documentary on the firm). The creators always find a new way to untangle Adam’s multi-faceted scams, showing a different side of him, telling a different story. They also lean into a huge range of characters – infusing new dimensions and tonal variations – giving them satisfying arcs. When the company is about to implode, for example, we see how co-founder Miguel McKelvey (Kyle Marvin) — a shy, unassuming architect — enables the Adam illusion. No madhouse is run by a single madman, and neither is WeWork.

But one of the best things about We crashed this is how he confuses a certain type of millennial mentality and hangs it dry. I’ve met a few people like that – mini-Deepak Chopras sinking into the gig economy – who feast on “vibes” and “pockets of peace”, who are so out of touch with reality that their biopics should be s call it “Hawa Hawaii”. Rebekah and Adam not only embodied this culture, they sold it to their employees until the end. Some of their conversations seem straight out of a horror movie – a portrayal of a couple addicted to each other’s madness. Rebekah, who often says “you can manifest that”, kicks people out because she doesn’t like their “energy”. When the press started running negative stories about WeWork, she said, “Why do they hate us so much? We just wanted to make the world a better place. And when, desperate to get past Adam’s shadow, she gives him a plastic smile and says, “I’m the soul of the company,” I got goosebumps.

Many of the scenes were so crazy that I thought “Come on, man” a few times, then remembered that the docudrama was based on “actual events”, then checked them out after I finished (they were all true) . But if life elevates the show, then life also interrupts it. Unlike a feature film, We crashed can’t change the outline of the story. This is why the series lacks a punchy – triumphant – final act. Because the Neumanns, like the Sacklers orchestrating the opioid crisis, got away.

But cinema can document and unmask – helping us to remember, not just now but forever – the pettiness, apathy and cruelty of the powerful. It remains one of the few powerful weapons of the “little man”. Otherwise, life would be too dull: if they have the fortune, we deserve at least the lulz.