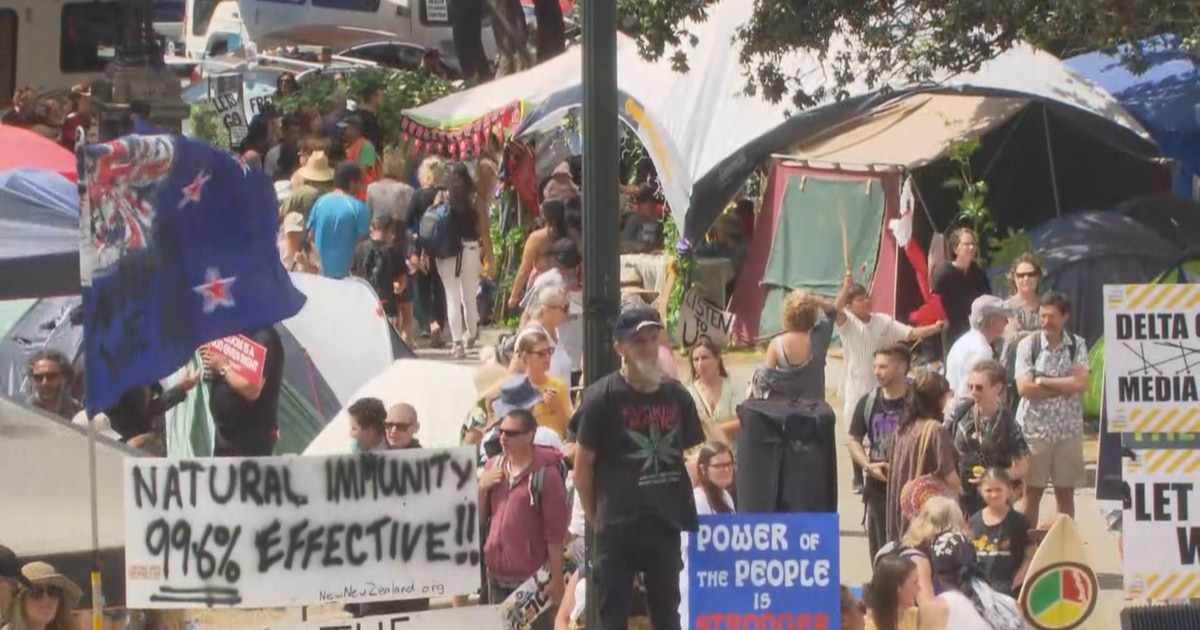 Over the past 19 days, the grounds of Parliament have become a soapbox for just about every political message imaginable. From anti-warrant views to anti-vax beliefs, and more recently to claims that sickness at the camp is due to electromagnetic radiation.

A sentiment that unites many protesters with disparate opinions is distrust of the mainstream media. News crews were met with cries of “tell the truth”, “media lies” and allegations that journalists covering the protest were paid government agents.

“Ordinary people posting comments on social media are more reliable and more accurate than you who cut everything down to suit Jacinda,” a man carrying a New Zealand flag told 1News at the start of the protest.

“Fifty-five million dollars to be Covid friends…says a lot, doesn’t it,” he said.

He was referring to the Public Interest Journalism Fund, a $55 million fund announced in February 2021 to help support struggling newsrooms.

So far, funds have been awarded for hundreds of reporting roles, training programs and projects across the country, with the money set to last for three years. New reporters for newspapers like the Greymouth Star, Ashburton Guardian and The Indian Weekender are being hired through the fund.

Projects and programs funded range from an investigative documentary on child poverty to a multimedia series focusing on New Zealand’s early Asian immigrants and their descendants. Very few funded projects focus on Covid-19.

According to NZ on Air, around 40% of the first round of funding went to projects benefiting Maori journalism. Through the Pīpī Paopao project, veteran broadcaster Mihingarangi Forbes says she was able to help train 74 iwi ​​radio journalists.

“Over three weeks, we ran 19 three- or four-hour workshops and about 200 sessions were held,” Forbes said.

She says New Zealand newsrooms are seriously lacking in diverse voices and the funding will go some way to helping that.

“When you invest in diversity, when you invest in tangata whenua, it always works well. In the last 15 to 20 years we have had zero investment and our newsrooms are starving. They are really looking for different voices , people who come from different communities and see things differently. [Currently] we have this type of mono information offering and it just doesn’t cut the mustard.

A summer series of his show The Hui, which will feature up-and-coming Maori talent, has also received funding.

“What I want to say to people is, really, if you did an audit on the stories we’re doing and the change we’re bringing to people…10 times out of 10, I hope we’ve done some good. “

Several funded projects also focus specifically on critiquing or analyzing government. Businessdesk is conducting a long-running survey of the New Zealand civil service. North & South magazine is funded to produce a long article on state care. Investigative journalist Bryan Bruce is producing Inside Child Poverty 10 Years On, a follow-up TV documentary on what has been done over the past 10 years to tackle child poverty.

Media commentator Gavin Ellis helped assess two rounds of funding requests and said the idea that the money is being used by the government to gag journalists is “nonsense”.

“I can assure you that in no way were we agents of the government in the allocation of these grants, far from it. The demands were in no way intended to support the government. When you have a grant to examine the effectiveness of the public service, it comes with an inherent inquisitive attitude.

“For the Open Justice programme, NZME and a number of other collaborators have taken journalists to court where previously they were unable to fund this resource. Thanks to this, we are now seeing much better court coverage. How does this put the media in the pockets of governments? This is nonsense.

Some of the anti-media sentiment comes from platforms such as the online conspiracy-based platform Counterspin media. Host and far-right extremist Kelvyn Alp regularly hits out at outlets like TVNZ, Newshub, the NZ Herald and Stuff, and has called for journalists as well as politicians, academics and police to be arrested and tried for crimes against humanity.

“State-funded media only reports government propaganda and never reports the whole story,” he said during a recent livestream.

Other personalities who drew huge followings during the protest included Chantelle Baker, who produces daily live streams from protest locations on Facebook. The daughter of former neo-con politician Leighton Baker is using her platform to point out the peaceful element of the protest, but has been reluctant to address Wellingtonian abuse or the violent rhetoric associated with the Occupy.

Ellis says social media broadcasts of the type that are currently shared by Parliament cannot be considered journalism, and so there are very few standards they must adhere to.

“They are not journalists. They do not pretend to follow the dictates of a regulatory body like the Media Council or the Broadcasting Standards Authority. They are free agents as far as they are concerned. Do they have a moral responsibility to tell the truth? Of course they do, but of course they have an alternate reality they’re sticking to…it’s propaganda.

“They produce the most compelling live streams because they are sensationalized. They’re like reality TV on steroids, so you get a lot of attention, but maybe not for the professional journalistic integrity or the imagery the mainstream media would use.

Regulations for the “mainstream” media

The Media Council is an independent self-regulatory forum responsible for resolving complaints about print and digital news offerings. Member organizations that register agree to a set of principles regarding accuracy, fairness and balance. If false or misleading information is published, members undertake to publicly correct the errors or, in serious cases, to issue an apology or a right of reply. Articles based on comments or opinions should be clearly identified as such.

The Broadcasting Standards Authority is a New Zealand Crown entity established by the Broadcasting Act 1989 to develop and enforce broadcast standards for radio, free and pay television. If a media complaint is upheld by the BSA, news outlets may be ordered to pay the complainant or, in the most serious cases, may be ordered not to broadcast.

If a journalistic project or program is funded by NZ on Air, it is provided in the Broadcasting Act 1989 that the government cannot dictate the content.

Vox’s The Goods launches “The Big Squeeze”, a bi-weekly column on consumption under capitalism